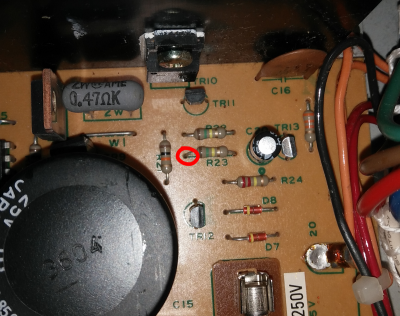 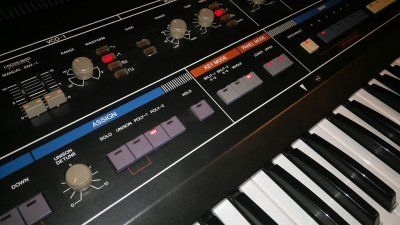 Problem is: I turn it on but I can't switch any of the patches etc. The only things I can turn on an off are the left side controls by the pitch bender. Also it makes no sound.
Zum Vergrößern anklicken....

this happened to my friends Jupiter 6...or at least it extremely similar. We were able to fix it by sending it a specific control change from the computer. I don't remember if the local was just turned off or what, but I remember the it was a higher cc#, right near the end of them.
Zum Vergrößern anklicken....

Factory is quite simple to use. Now that it is installed, turn on the Jupiter
6. You will get a code in the form of lights on A-F and 1-8:

A 1 - External scratch RAM failure. This means that the code was unable to
read/write an image to the external scratch RAM within the control
board. The most likely cause of this is a defective SRAM chip. This
does NOT indicate a failure with the non-volatile RAM.

A 2 - Internal CPU RAM failure. This code means that the memory built into
the 8031 (or 8051 if so equipped) is defective. The main processor
should be replaced.

A 3 - NVRAM read/writes unreliable. FACTORY Will attempt to run a memory
check on the non-volatile RAM, and if this memory test fails it usually
means a low battery. If the battery is 3 volts or stronger, then the
problem is most likely with the NVRAM chip itself.

A 4 - Memory protect is turned on. FACTORY Can't do its work if you have the
board's write protect on. Turn off the board, turn the write protect
off, and turn the board back on again.

A 5 - Failure while writing information to NVRAM. In addition to the tests
originally run on the NVRAM, the data pulled from the FACTORY EPROM
is verified when written to the non-volatile RAM. If, during this
step, data read back from NVRAM doesn't match what was supposed to be
written, this code will be presented.

A 8 - This indicates a successful NVRAM write with the factory patches.
Zum Vergrößern anklicken....

Usually an analog synth tuning algorithm works by measuring the frequencies of the VCOs, one VCO at a time, by returning their signal to a frequency counter or comparator IC (there are CMOS switches involved in the routing of the signal back to the counter/comparator). On the Jupiter 6 this is being handled directly on the voice cards, where the schematics identifies the Auto-Tune circuitry as COMPUTUNE. The voice card's CPU, by means of the comparator/counter circuit, measures the VCOs over a range of frequencies and calculates an offset that is being added to the VCO control voltages, in order to make the oscillators producing the right frequencies (= the right notes). When all the VCOs are tuned the voice's board CPU notifies the instrument's main CPU that its job is done.

If all the oscillators on a voice card don't tune the problem could be in the Autotune circuitry, and it usually regards the CMOS switch ICs and/or the comparator/counter chip. The CMOS switches used in analog synthesizers usually are the 4000 series ICs, quite well known today as a common failure point. And if the Autotune circuitry is faulty it's possible that is driving that voice board's CPU crazy, resulting in the whole synth freezing when trying to invoke the autotuning function from the panel.

To diagnose the computune circuit I'd start to scope the output of its 4051 CMOS switch (IC20, pin 3) to see if there are VCO signals coming out from it when the Autotune procedure is being invoked from the panel.

Another failure could be in the CV DAC, which in the Jupiter 6 is the now (unfortunately) rare Intersil ITS80141, and there's one on each voice card. To see if the problem resides in the DAC, with the synth set in WHOLE mode make a patch with just white noise and with the filter/amp being modulated by their EGs. If the patch sounds quite consistent over all voices (play different keys so different voices will be fired), both the DACs are OK. If not, compare with the oscilloscope the output of IC12 (the DAC's output op-amp, which is a TL081) on the voice cards, which should look similar for both. If this is the case the DAC is OK and probably there's a problem in the S/H demux circuitry after it, which is full of 4051 CMOS switches and TL084 op-amps, the latter again being a common failure point in analog synthesizers. If not, the DAC's output op-amp or the DAC itself on the 4-voice board could have failed.

huebner Informationselektronik | …about some special projects