Synthesizer DatabaseSolina Strings, well known from some Tangerine Dream classic albums, the String machine is polyphonic, has some envelope like contour and knobs for cello, violin etc.. . 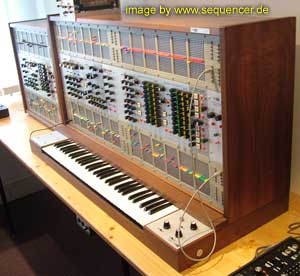 I don't believe there are too many of these digital sequencers made:

ARP 2500 with another wing
1970 made..
all modules are located in the middle,
no need for patch cords (well only a few)
the rest can be done by a special bus system..

on top: all inputs
on the bottom: almost outputs

if you set the bus to the same number they are on the same bus and can be routed together that way or modulate..

about the digital sequencer on top:
This unit is one of a kind.
Not made by Arp.
Made by David McLey, of David McLey fame. (thanks to Kevin "synthfool" Lightner for info..) 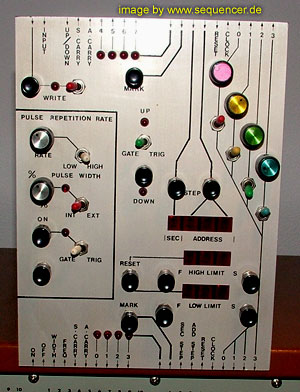 the filters are quite special, there is a function called keyboard percussion using the resonating filter to be used for that, you can also set the notch on the main filter, there are envelope mmodules with LPF attached, dual ADSR , VCAs and double VCOs 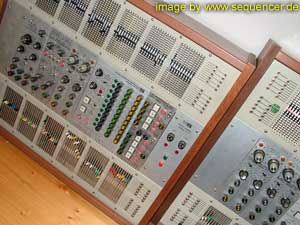 if you use the bus system you can have FM quite easily..

Movie ARP 2500: as mp4, 1.7MB (needs vlc to play or something, please prefer this one!)
(me tweaking the arp2500, some crackling sounds - only recorded via the mike in my camera, so it is no HiFi sound.. but you can hear the filter crackling stuff..)
if you cannot play mp4 (too lazy to install the best player for all platforms) use this: movie here (18MB),avi.. 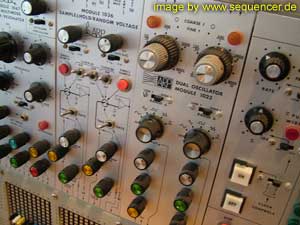 most pics can be enlarged..
just click on the images.. 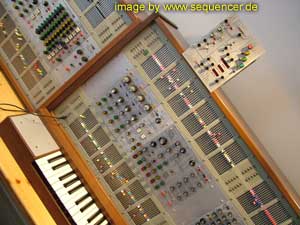 below: instead of patchcords use the matrix! 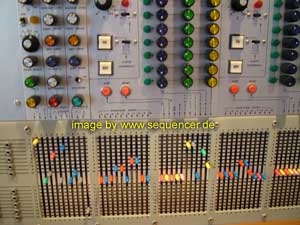 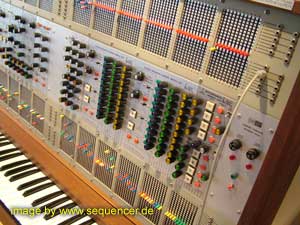 THE ARP 2600
the modular synthesizer 1970 - not really semimodular btw. since you can still access and rearrange the modules and signal flow

3 VCOs and an LFO in the Keyboard
it can also trigger the Envelopes.
there are 2 ENVs,
1 ADSR
1 AR
and a nice reverb spiral/spring hall

there are 4 versions (3 shown on the top pic here) there left red/black one and the white/grey/black ones are quite common, the right one is a very rare 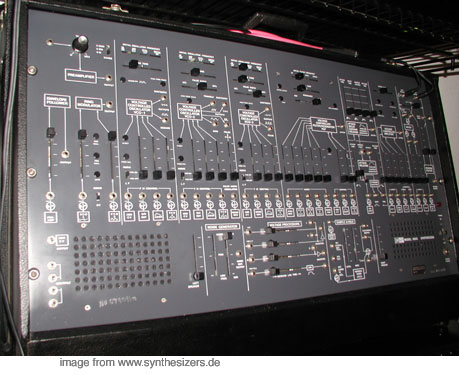 .. anyway the ARP 2600 modules are encapsulated and can not be opened by anyone, but there are ppl able to to so like achim lenzgen from synthesizer service, germany / namedy.
I'd strongly assume those modules are encapsulated like this because ARP "lended" the moog filter cascade, anyway it sounds a bit more "uncoloured" or less "typical moog" - some ppl say it is more "acoustic" in a way.. it's hard to tell - in words!..

some arp2600: thanks to robert schweizer for pic 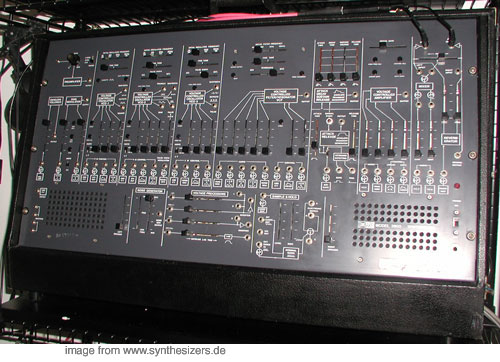 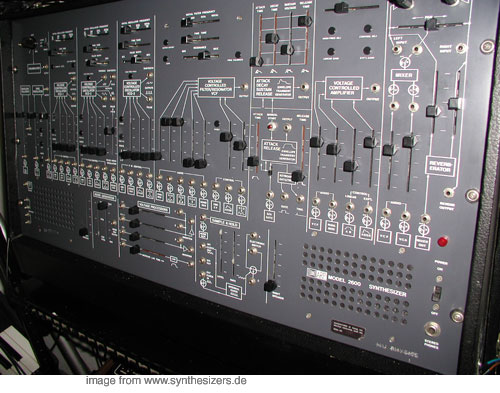 is also an ARP product but as you can see ARP died before but the Chroma has been released by rhodes!!..

want to see it? go here:

ARP made about 300 Avatar s , it's the "guitar synth" version of the odyssey and is more close to the 2600 (so does the odyssey) than you might think of.. it is the same features as ody. but it has more jacks for modular access. in fact you can simply add those to you odyssey,too! 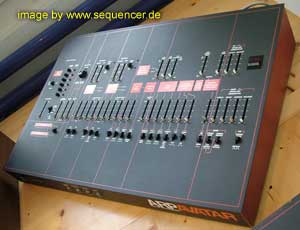 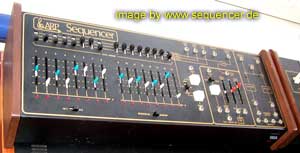 the faders on all arp synths are a bit "rough"..
it had a quantizer on board, which makes it easy to set notes with continous sliders..

ARP synthesizer
(Alan Richard. Pearlman)
ARP Odyssey 1972 /
ARP Avatar 1977 ..
DAF and Conny Plank (known for producing Can,Kraftwerk, DAF etc.. in Düsseldorf/germany) used it (with a korg MS20) .. it has fast envelopes and was some sort of competition for the minimoog.. it had indeed more features than the mini. there have been versions with 12dB/oct LP-filters, later versions were equipped with 24dB/oct filters!! also the color has changed (white and black). also the tune potentiometer is only one option: other versions had 3 white "proportional switches" 2 OSCs and an LFO, S/h (lag time but no sample time slider as on the roland sh5) also a non VC-able HPF is there like on some rolands.
click on the images to enlarge them!!.. 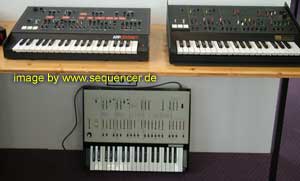 versions:
the first version odyssey I was 12dB/oct, white and "golden" versions, after that also "golden"/black was the 2810 (odyssey II) first with pitch knob, later with propotional control pitch like the one here on the pic on the right, the later III model was equipped with 24dB/oct LPF and golden/black design, later models known as odyssey III were black with orange letters. ARP had internal numbers for the odyssey series since the filter module changed and the proportional control and pitch knob.. 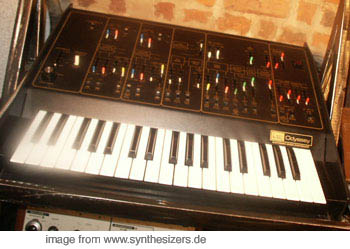 the ARP odyssey II with pitch knob looks like this.. 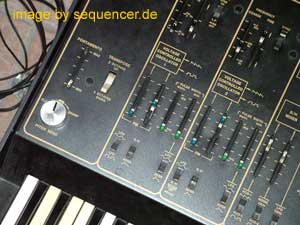 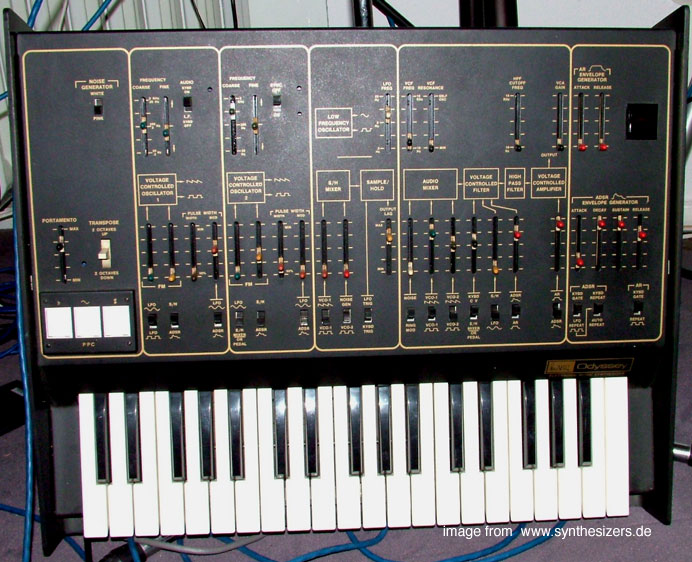 some ppl modified this to be semimodular like the ARP2600
also the avatar can be modified, it is very close to the 2600 and odyssey.. maybe underestimated..

CMS offers a modification (same for the avatar, which is in fact an odyessey without keyboard): there are a lot of mods possible with the ody/avatar , even for DIY: accellerate/slow down speed of the lfo, speed up the envelope, add inverted envelope (it's already there!! you only need a switch to route it), filter mod (3 resistors and one condensator to change here.. to widen the filter freq range), bridge the hpf or reduce it's bypassed "bass killing" effect, and more waveforms to route (cms also offers to convert some waveforms and adds a 12dB/oct filter!). and all modularized by adding nice jacks for outside communication. if you are in love with your soldering iron, it can be done in 1hour. but there is CMS, if you don't dare to to that yourself. 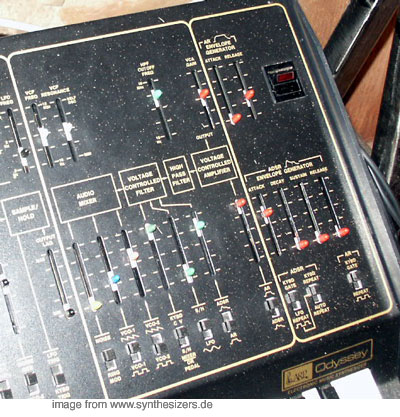 octave made the "cat" that is very close to the odyssey (and went to court!)

strangely the VCO waveforms are switched at the mixer section.. most illogical? no this price goes to the yamaha cs30 where you need to forget all concepts of synthesizer panel designs ;) (anyway the cs30 is hammer for it's capabilities) 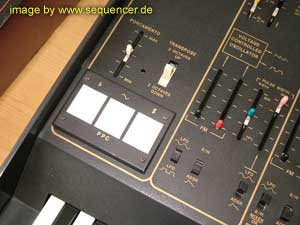 Chroma is also made by ARP but was sold by Rhodes.. see extra page for the Chroma

ARP Axxe
ARP Solus
are both smaller one-osc versions of the Odyssey..
there are 2 versions (as always with arp): the golden and the orange/red on black.. 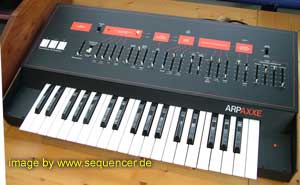 Solus: 2 VCOs with PWM by LFO, 1 LFO and 24dB/oct LPF filter, one ADSR env. nothing special but possibly an alternative choice.. 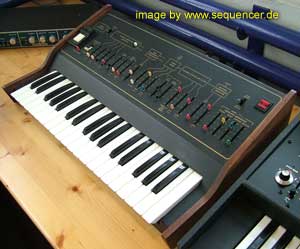 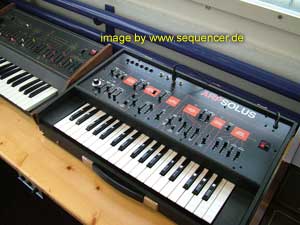 ARP Modules for Educational Use

omni: a sting ensemble like sline string or comparable.. sounds nice.. but really 4 sounds only ;)
quadra: some "all in one" synth with string section.. from todays view more "exotic".. the synth section is not really "sophisticated" has mono bass synth, duophonic lead synth and poly string, one ADSR & 24dB/oct LPF..
a "full" orchestra kind of live synth those days,... but not really for making astounding sounds now ;) 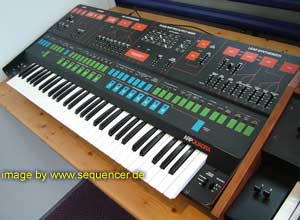 a lot of good string synths came from italy, another one came from the netherlands.. some where simply bought from more known companies.. 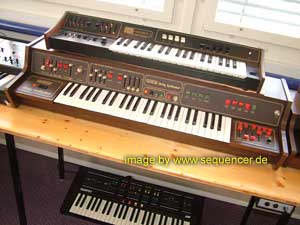 Octave (Octave Plateau)
this is NOT an ARP product but imo it was best to place it here.. Octave ..

what? it's about the same as the odyssey II / III, but it has 2 (two) suboscillators and you could blend those waveforms (instead of just switching like on the odyssey).. so it may still be a good alternative.. with the so called SRM update it could be played "duophonic".. 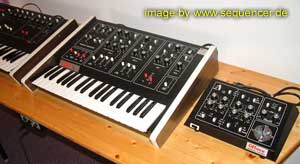 so see this as an alternative choice.. there has been a smaller version "the kitten" with just one VCO but both were forced to stop production. copyright reasons.. 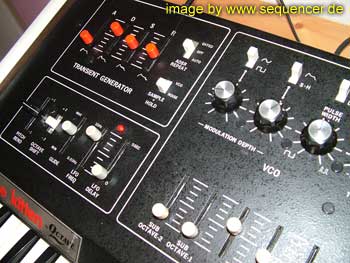 PICS:
most of them can be enlarged.. click on them! 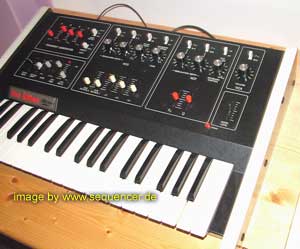 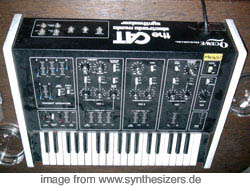 there was a voyetra one also,but monophonic. 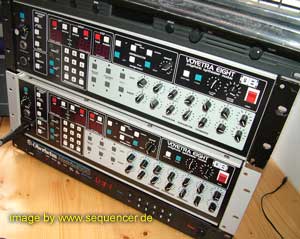