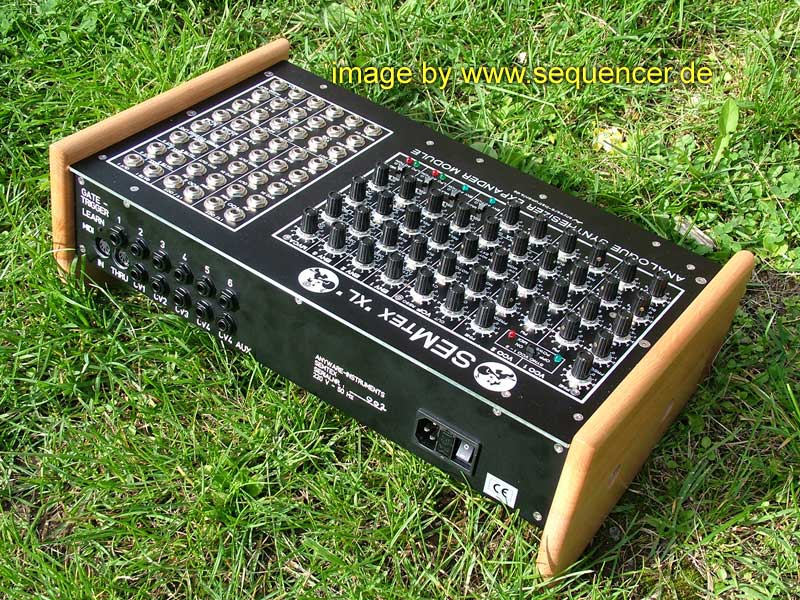 Arpeggiator no
Sequencer no
(ID 68)

it has it's power switch on the front panel and the top 2 rows are the midi CV + gate outs, that can acced from the front, the midi jacks are on the back side.. 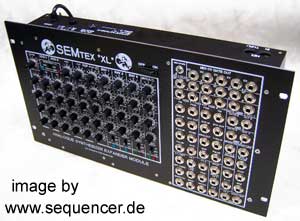 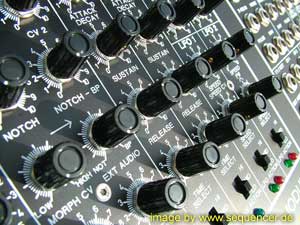 Filter is CV-controlled to morph from lpf to hpf..

Both Modular Synthesizers, the XL Model is for starting into the modular world or to add it to a modular system. If you have a modular and do not need LFOs or ENVs the S Version is perfect for you. 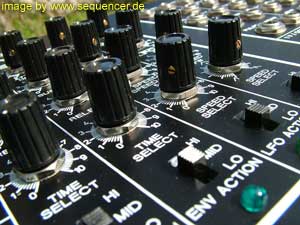 IMAGE
Semtex Knobs
our code for the Semtex was "felix".. here is the logo.. 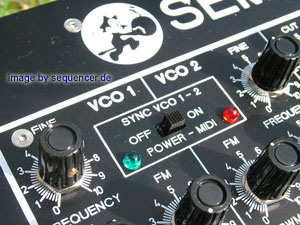 IMAGE
Semtex MIDI
midi is on the back side, the rest is on the front (switch and CV + gate jacks) 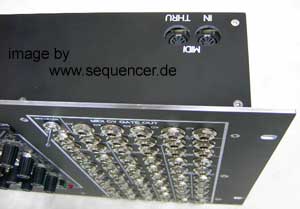 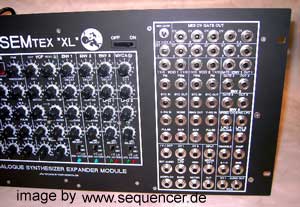 IMAGE
Semtex
Features Semtex XL semimodular prepatched, so you save a lot of patchcords! MIDI: just patch the back side MIDI jacks to the desired mod destination, there are 6 triggers also for ENVs and stuff.. all patchable all VCO ins, outs are available. MIIDI Interface built in!

IMAGE
AUDIO FILE (download)
little "Synthpop oldschool" Demo 1 - Semtex only
I made this on Ser #4 Semtex with Prepatching!
Semtex

AUDIO
AUDIO FILE (download)
here is a morphing by CV (LPF to HPF by ENV3)
could be useful for nice modulation leads?

LINK
- INFO TEXT
Semtex Review
Anyware-Instruments SEMtex
Plastic dynamite? C4? Crash - boom! Can that be a synthesizer? Yes, some of you have certainly heard the rumours. The SEMTEX came on to the market a bit ago. What's the story behind this instrument?

Pre-history
The SEMTEX was actually just a vague concept. After the Simplesizer and the Forumodular the collective thought was, modular is great, maybe we should do something new! After some forum discussion it became clear that it should be something that sounds good and that is modular. The Oberheim SEM Module was actually designed with this in mind, even though it was originally a Minimoog expander module. Thomas from Anyware-Instruments had already outfitted my old SEM as a modular module with a power supply and patchbay and it was immediately clear: that was an improvement (the patchbay). Before the Synthesizerforum.de got around to choosing a name, Thomas had already done a give-away in a thread about good sounding SEM alternatives. In November 2004 some features of the "new instrument" thus crystalised for the first time. After that the prototype of an extended LFO module was produced ("HÃ¶lLFO", still in use).
Semtex . internal name: felix ;)

Some months of research brought the following results: the HelLFO was reduced by half so that it could be installed as a very fast LFO in a modular system.

Interesting: the original SEMTEX wasn't supposed to have any envelopes, and thus no LFOs. However, the modular "SEMTEX Model S" was replaced by the "SEMTEX XL", with three (!) envelopes and some further extras.

The SEMTEX XL, available for 1200 Euro, is made of very robust metal with massive wooden side bars (they're really beautiful!). Because Anyware-Instruments didn't want to make do with scatchy knobs, they took the best option they could find - high quality knobs with very fine tuning qualities, the most expensive choice. They have a smooth feel to them, and all share the same turning resistance. Further, they used Switchcraft jacks for the patchfield, because SEMTEX is fully MODULAR!!!

The SEMTEX has borrowed a lot from the Oberheim SEM, but it's not a clone. It offers two VCOs with their own SubOscillators, hard sync is available. Frequency range is infinitely adjustable, there's also a fine tuning button for percision work.

The VCOs feature saw and pulse with variable pulse width. SEMTEX is prepatched, LFO1 is used for PWM. Of course you can ignore all of this, if you wanna do the work yourself by patching yourself. White noise and a ring modulator are available as well. SEM users probably won't remember this, because the original module had neither SubOsc, nore FM, nore ringmodulation.

The VCO sound is expansive and extremely beautiful. If someone is looking for a competetor to compare with the real thing, this is it.

Main attraction is the filter section, not the VCO part. Here is something, you rarely or never find in other synthesizers. Morphing from LowPass to HighPass via Notch Filter. To top it all off, morphing can also be done through voltage control!

This filter is the Oberheim 12 dB/Oct-filter, which is available in the SEM with the addition that beside voltage controlled morphing, the endresult can be adapted to the BandPass function.

BandPass is not voltage controlled, but the filter still sounds warm and full, even with high resonance settings. Self oscillation is no problem, either. Those who prefer filter-FM should try the SEMTEX here, it sounds extremely warm and congenial. Even vocal sounds can be imitated.

In addition, all filter types are within reach on the patchfield for simultaneous use.

Blasting bon bon
As we said way back there at the beginning, the SEMTEX comes with 2 LFOs und 3 envelopes. The envelopes are set up in the usualy ADSR structure, with one exception that offers a simpler AD form. In addition, the two complex envelopes feature a sort of "gear shifting": Low, Medium, High! Have you got it? Right: fast as a flash or slow as a summer day. These envelopes are very snappy - even faster than those of the great Roland Jupiter-4!

What about the LFOs? Taken from the above mentioned HÃ¶lLFO, they feature the same "gear shifting" function. That means, the LFO goes up to the KiloHertz area (> 1000 Hz)! I personally enjoy the dual-coloured LEDs a lot - each sharing half of a wave cycle with the other. That makes visualizing the LFO up to very high speed possible.

Various kinds of pulse and saw are available on the LFO. You can use all of them simultaneously - just like on the Yamaha CS-40M - although, of course, they have the same speed.

An additional feature of LFO1 is a ready-for-use Sample & Hold - "Random Velocity" - whereas LFO2 comes with Sine. The LFOs can be synchronized. For those who are still not satisfied, there is a CV-input for tempo of LFO1.

We also have to mention the second VCA, which can be freely routed. I'm thinking of FM modulations, stereo-effects and panning, or even mixing within the two VCOs via envelopes or LFOs.

Additional control options
How do I keep all of these dynamics under control? The complete analog SEMTEX not only includes a complete patch field plus CV/Gate outputs (backwards), but also a built-in MIDI interface. Connoisseurs of the DIY-scene maybe know Marc Barreille's Papareil-Site. He?s the father of this Midi-Interfaces.

Along with the Midi-In port the SEMTEX offers a serie of analog trigger inputs and a further six pack for voltages. The keyboard voltage (CV) and the velocity are there in the first place for the two cv-outs. The remaining four CVs and six gates can be freely routed with the use of the PC software.

Midi Clock and pitchbend data are offered as well. Considering ist origins (one-man company, DIY, etc) the MIDI functions are generally very satisfying and may even be used to control other modular systems. The big guys can't offer more! The only little disappointment is the fact, that you need a PC or at least an emulator for controller adjustment. On the other hand you can also feed the system the necessary information with the help of sys-ex data. It's only a matter of time, until the necessary tool (maybe a sound diver adaption) will be available.

SEM? or 4Voice?
Four SEMTEX can be linked together in order to function as a polyphon synthesizer. That means toping the TVS-1 or the Four-Voice. The competetor Semblance can also do that, but otherwise it offers very few Midi functions, and as a matter of fact no modular patch field. The only real alternatives in this sound class are the original Oberheim X-Voice modules (SEM, Two Voice, Four Voice), but these have fewer features and no modularity. There is a modular version available from Kevin "Synthfool" Lightner, but who lives in his vicinity and who knows if Kevin is in the right mood?

We are sound machines! Tweak us!
It's time to sum things up. The patch field features all modules with in/out jacks. Beside S/H, every VCO, filter or VCA can be alternatively set up, this system is therefore a think-about alternative for modular newcomers.

Those who love broad, expansive sounds, do well by the SEMTEX. Those who want it simpler, should get hold of an old SEM or Semblance module which are cheaper but not modular, and which do not offer some of the special features, above all no filter morphings.
SEMTEX sounds (MP3)

What's so special about a SEMTEX? Percussive, passionate, expansive sounds. From pads (simply beeeeeautiful) to ZAP-Sounds. Of course a 12dB-filter is a 12 dB-filter! Those who get hooked know what this will mean for their first modular investment.

new: the 19" Semtex XL
it has it's power switch on the front panel and the top 2 rows are the midi CV + gate outs, that can acced from the front, the midi jacks are on the back side.. there will be a sequencer around summer 2006..

this review done for bluesynths.com one of the most wonderful sites I know..

Thomas Welsh from Germany, Fischbach did filterboxes first and later built the most advanced Oberheim SEM inspired modular synth and the inSEQt modular sequencer and other creative modules like the cloxbox, DIY synths and is part of our community also, the second modular meeting happy knobbing took place near his place.DER HERSTELLER
THE MANUFACTURER