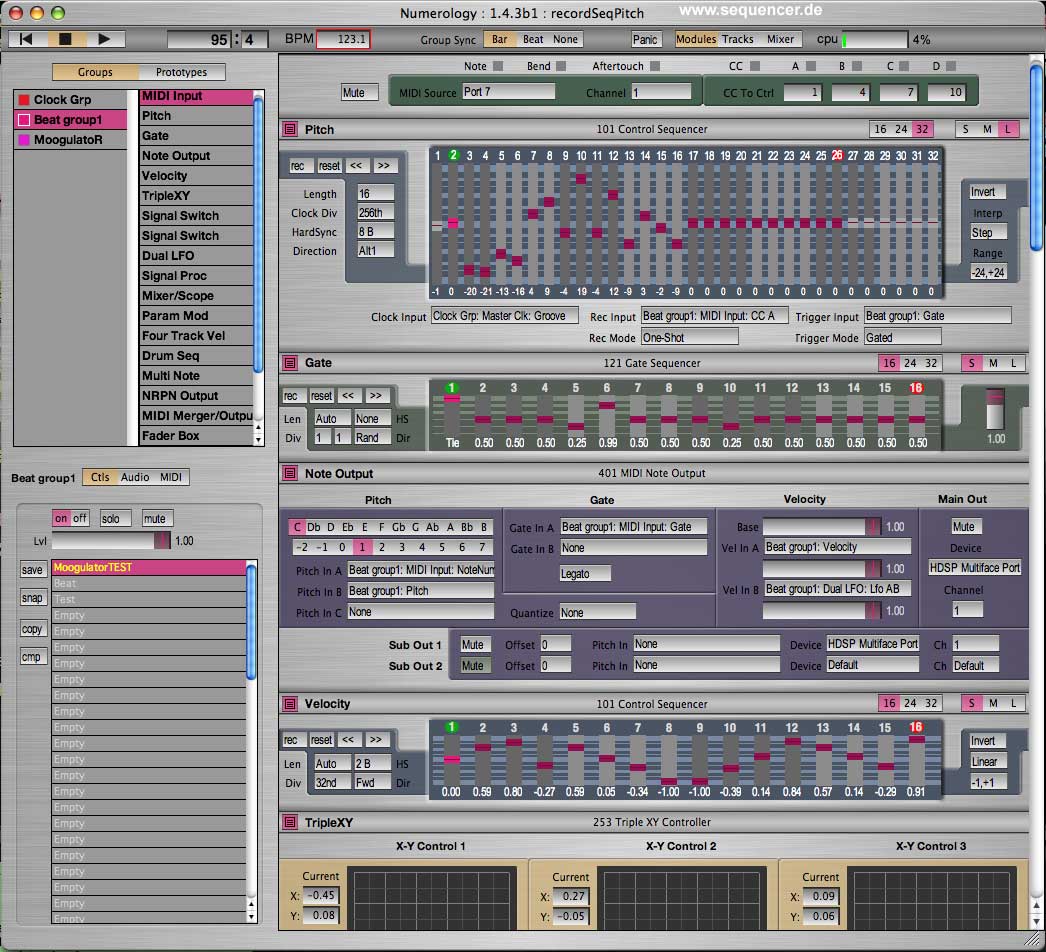 ABOUT Specialized Step and Modulation Sequencer System and Host for Plugins.

Since V2.0 (2008) it offers 128 Steps, LFOs, Arpeggiator, Matrix Sequencer (like Reason, but with 128 Steps) full CC Control of any (ANY!!) Step, also new Sample based Drums and Instrument very much like the Ableton Live Impulse/Simpler Modules Start/Loops modable.

VIDEO
- INFO TEXT
Five-12 Numerology - Interview
Q: why the name five12? is there a story behind it?..

Well, I guess it all boils down to noticing how certain numbers
will tend to keep appearing, and how one tends to keep noticing them.
The last four digits of my home phone number for a long time were "0512",
512 appears regularly in computer work (it being the 9th power of 2), and
I happened to register Five12 as a company on February 15th (2/15 being
512 backwards), etc. etc. Since music is really all about numbers and how
they combine and repeat, it seemed an appropriate choice.

numerology could be a nice hidden track on kraftwerks "computer world" album, ;)

The name Numerology actually comes from a series of 3 electronic music shows
I did a while back in Peoria Illinois (they were billed as "Numerology 1 - 3").
Those performances were my introduction both to the thrill of live,
improvised music-making, and the tedium of trying to do such improvisation
using the tools I had at the time. A year or so later, once I had written a sequencer
to solve those issues, Numerology was an obvious and appropriate choice for
naming it.

I plan to keep the current 'core' sequencing modules at
their current lengths. However, there are some "Switcher" modules
that allow you to chain them together to get long or even very very long
step sequences. (FYI: due to a silly build issue, those modules
are not usable in the current beta).

the more I work with it , the more I like it.. it reminds me of the "schrittmacher" sequencer by manikin (a very small german company).. but.. well better.. ;)

:) I've seen it. It looks very cool, but, well, I'm sure you have a good idea
of what my thoughts are on step sequencing by now! :)

I have 2 questions that ask for arpers and the timeline pattern-change which is already in ;)
just ignore them ;)

how about triggering and muting numerology with the electribe mute signals? ..
things like that?..

As I mentioned in the longer email, there's much that I can do to make
it easier to control Numerology from hardware controllers (both dedicated
controllers and synthesizers or hardware sequencers), so yes, that is something
that would be very nice to have. The trick, of course, is to design features
that are flexible enough to be used from many different types of controllers,
since, as you mention, there are more and more coming.

Q: I like that NRPN is now abord, will add nrpn input also or something like CC to NRPN and vice versa
(for synths like the alesis andromeda to be used as a "controller box" the normal way.. is it planed?

A good point. Yes, I would say that it is planned.


Q: ..and do you plan more control change / modifier modules? (changing CCs and ranges and the characteristics..)
(well, a bit like the morph range)

Yes. The current options for scaling and modifying control signals is a bit cumbersome (the Signal Proc module),
I plan to make that a bit cleaner for 2.0. There will also be more options for MIDI Remote Control, such as
assigning one CC to control multiple params, built-in scaling, and so on.

Q: You already let me check out 1.43 Beta already, but 2.0 is in the pipeline, what do you plan for numerologys future? (do you know when it will be ready? (I know this is an evil question for a small company) ;)

Can't say yet. I'm still deep in the guts of the new code. I won't be able to make any guesses for a release
date until I'm make it to the "porting existing modules and adding new goodies" stage. However, as with
previous development cycles, I post updates to the user group, and registered users get access to beta
releases.

Q: What "philosophy" do you have as a company? the prices are not that high and you shared the messe booth with other small companies (eg Urs Heckmann)..

I'm definitely on the experimental side of things. Other than some general design goals for Numerology (improvisational,
modular, performance-oriented, etc.), there are several personal goals. The first one is that Numerology is that should be able
to do all the things I need personally for music production. This may sound a bit selfish, but it's necessary when you're
working on a project that spans several years. The next goal is to make sure that Numerology is really useful
for other musicians -- that it really does help them explore new musical terrain. As far as prices go, I like to keep
the entry-level price very reasonable, so that is affordable for almost anyone. After 2.0 is released, there are some
more advanced things I would like to pursue that would probably end up in a more expensive 'pro' version.


Q: do you plan to control Numerology Module-Parameters via hardware controller box? possibly some sort of hardware version of numerology or controller hardware and the mac doing the rest..? like having 16 steps on 16 knobs, possibly work together with another manufacturer for controller boxes like faderfox etc. or OSC to be controlled via touchscreens like the one from jazzmutant (lemur)?
..a "midi learn" tool for the modules..?

There's a basic but useful MIDI learn feature now. It is setup by ctl-clicking to assign a MIDI controller to
a Numerology parameter. I also plan to add more controls such as the ability for a remote control to bring
up a specific group or module. Because of the number of different hardware controllers around, I want to
avoid trying to target certain controllers. On the other hand, there is much I can to to make it easier for
users to integrate their choice of controller with Numerology.

Q: What is your personal background and motivation to write numerology? are you into more experimental "modular" music? what do you think about performing with numerology?

Numerology for me is all about performance, or to be more specific, about creating a environment
for structured improvisation. A concept I use frequently with Numerology is based on a term from French
cooking, "mise en place" (literally: "to put in place"). For cooking, it means that one prepares
and sets out all ingredients and tools before preparing a dish in earnest. I find that approach
to be a great way to work in the studio as well:

I start with some ideas for the overall structure for a piece, then setup several groups In Numerology
for each part (drums, bass, samples, loops, reverb, fx, and so on). Then, within each group,
I will setup various combinations of modules. Usually a simple sequencing group for a monphonic
bass line, then something more complex for sample mangling, and so on. Finally, I will pick some
synth patches and samples to use, and program a few starter patterns in a specific key and tempo.
This is something I can do in Numerology in just a few minutes. Once that is in place, I have a very
productive environment that is both structured (because I've set some limits what sounds I can use
and how I will use them) and improvisational (because Numerology makes it very easy for me to
transform a few basic patterns into a wide range of sounds).

Q: do you plan something like programmable patterns in the "arrangement" (tracks page) mode or something more close to the old school sequencers? or do you see numerology more as a tools to go alongside with those "conventional" ones..?

Yes, and yes. :) I do want to have a module for recording and playing back MIDI in a piano-roll style, but
with a few twists. And I plan to add features to make it easier to integrate Numerology with other applications,
primarily through ReWire.

Not a this point. The primary reason is that I don't currently have the resources to develop and
support Numerology on more than on platform at a time.

Q: and one more thing: Numerology is already a host for plugins, do you plan audio plugins, synthesizers / FX, things like that based on numerology? maybe audio in - FX..?

There are some delay-based plugins that I would like to release. Some are for my own use, some
are to expand the options available for users, nothing fancy. There are many great Audio Unit plugins
out there right now, so I don't feel the need to write AU's other than to fill in little gaps here and there.

Q: what is your greatest wish for numerology? something that is not on the feature list of 2.0 ? ;) (<--)
(this is the question including the hidden ambush) ;)

Well, since I haven't finalized the list of features for 2.0, I can't really answer that directly. What
I can say is that I hope that the new architecture I'm building for 2.0 will be a solid basis
for any features I want to implement, and the early indications are that it will be.

Q: hmm, how do you think about the open environments for music like max/msp, reaktor etc..?

I've used many types of modular software, and each has its own collection of good points
and limitations. I think with any kind of music software, as with traditional instruments, it is
really up to the user to decide what instrument is best for them.

-->Q: now you could add some infos or things where my questions are too silly.. ;)
feel free to add any interesting thing that I may have missed out..


..will we see you on the next musik messe again?

Yup! Assuming Urs does another 'underground' developer booth,
I will be there.

any plans for the future?
since the price is not that high, are you happy with the sales?..

Considering that my marketing budget is almost zero, I'm pretty happy
with sales. Once I've finished the development push for 2.0, I will move
into marketing mode for a while, so I expect things to change quite
a bit when that happens.

thanks for your work ..