a disc to sace and load data to/from, no more in daily use today.

the bigger ones were floppy (thats, were the name came from) discs. the 3.5" format was still diskette format but no more sloppy / floppy.. 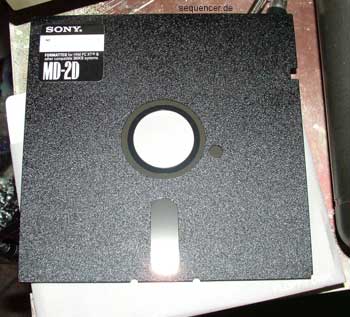 DOS format was the most common, even for synthesizers but most manufacturers got their own way of structure (proprietary), also Mac can read PC formatted discs (was introduced around OS 7.5 times called PC exchange) - to read Atari ST discs its best to format them on the PC or Mac and let the ST write the disc and THEN read it back from the PC/Mac (todays Macs need USB Disc drives since Macs have no Diskette drives anymore for a much longer time compared to PCs).