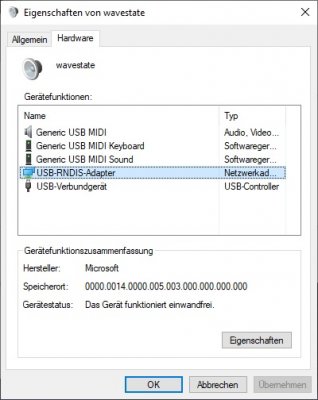 Hi all! I have an update regarding Windows 10 (version 2004) and RNDIS. Microsoft is being very responsive; we have been working with them, and we anticipate a fix soon. Thanks to everyone for their patience with this. I'll let you know when I have more information!
Zum Vergrößern anklicken....


Hi wavestate users! Tomorrow, Apple will release their next major OS version, macOS 11 “Big Sur.” macOS 11 has some big changes under the hood, and I’ve already received mail from other audio developers cautioning me not to update yet. Similarly, wavestate users on the Mac SHOULD NOT UPDATE to Big Sur until we release a matching update to the wavestate software. We are currently testing that update, and hope to release it very soon.
Here’s the important part:
The fix requires an update to the wavestate itself.
If your Mac is already running Big Sur, you won't be able to install that update.
So, if you don't have another machine running Windows or an older version of MacOS, you'll be stuck - and we don't want that to happen!
Thanks for your patience. We'll let you know as soon as the update is available.