leilei
.
Hi to all, get some advice from your guys, I konw you are always great. The backgrond for question: I have a system that consists of both a MIDI transmitter and MIDI receiver, that are separate units and connected between each other with cables. A PIC32MX6xx-series microcontroller forms the heart of each of these two units/sub-systems. The transmitter generates MIDI messages of notes played on an old mechanical musical keyboard that has been MIDI-fied. Each note-on/off event consists of 3 bytes of data, as per the official MIDI standard:

This data is sent over the PIC32's UART at the standard MIDI baud rate of 31250 bps. Furthermore, the UART conifugration is the commonly used 8 data bits, no parity, 1 stop bit. Of course, the receiving PIC32's UART is also configured exactly the same. Upon receiving the MIDI messages, the receiver performs some operations based on the received MIDI message and some other user inputs/configurations. The whole process works mostly fine even with successive notes that are played very fast.

However, the problem comes in when a large enough chord is played and the notes from the keyboard are pressed down exactly at the same time, typically with a chord size of 5 notes and larger. What happens is that most of the MIDI messages received are processed correctly, but the UART peripheral freezes at what seems to be the last received (perhaps partial) MIDI message. Thereafter, no more MIDI messages are received. An important aspect to mention is that the transmitter still transmits all the MIDI messages as it should - no problem there at all.

Now, what I do know and found out after a lot of searching on this type of issue, is that a UART buffer overrun error occurs. I know this because the UxSTAbits.OERR bit is set when this freezing phenomenon occurs. When I clear this bit, the UART operation continues as per normal. My conclusion is thus that the MIDI messages are transmitted and received faster than they are actually read and processed by the receiver, causing a buffer overrun due to the data in the FIFO buffer not being read fast enough. Consequently, this causes a loss of data, since the UART peripheral freezes while there are still MIDI messages being sent by the transmitter.

What I would like to ask: How can bypass this issue? I know the UART receive buffer is 8 levels deep. From my initial understanding, this would mean one character received for each level. However, from the datasheet it seems that a total of 13 characters can be received before the OERR bit is asserted by the PIC1010. Therefore, my understanding of these levels are probably wrong: 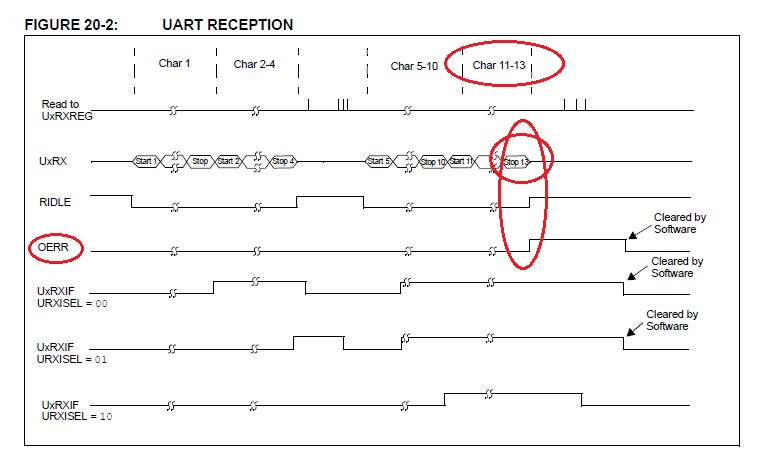 This is how I handled the UART reception until now:

/* Process the received data */
processIncomingByte(dataRx);
} /* while */
} /* main() */
The function processIncomingByte() determines which byte(s) of the complete MIDI message have been received thus far, and performs some operations after a complete MIDI message is received. It determines that one byte at a time, as the bytes are received over the UART.

One option that comes to mind is to somehow clear the FIFO buffer immediately after each MIDI message is received (and copied into a software-defined buffer for processing), so that a buffer overrun should (in theory) never occur. I have tried this, but it didn't solve the problem and the buffer still overruns as described. I have tried it as follows:

I suspect that the processing time for all the MIDI messages received are just too long to read new incoming MIDI messages when large chords are played (with notes depressed at exactly the same time), since everything works fine, even with rapid successive single notes. Therefore, another option that comes to mind is to simply increase the PIC's clock frequency. Currently it is set at 8 MHz. Could it possibly solve this issue if I just increase the PIC's clock frequency? Processing of the messages would happen much faster, while keeping the baud rate the same.

Although I am not bound by the standard MIDI baud rate of 31250 bps, I want to avoid changing the baud rate as far as possible. In any case, this will probably not solve the problem anyway. Increasing the time between transmitting MIDI messages might work, but that could introduce a tell-tale delay as more and more MIDI messages have to be transmitted in a specified time period.

I know this is quite a mouthful, but I tried to describe my problem as clear and complete as I possibly can.

Any help in this regard would be greatly appreciated. This is a rather urgent situation.

If you had any ideas, welcome to leave message, thanks in advance.