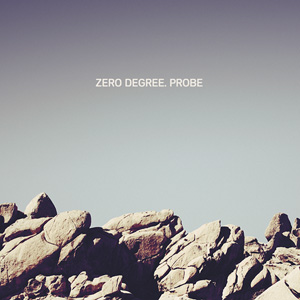 "i've seen things you people wouldn't believe. attack ships on fire off the shoulder of orion. i watched c-beams glitter in the dark near the tannhauser gate. all those moments will be lost in time... like tears in rain... time to die." [blade runner 1982]

zero degree was founded in 2004 by matthias erhard who already had a long background in experimental music. during his 2 year stay in canada from 1999 to 2001 he discovered minimal and idm, which opened him up to a whole new perspective of ways to express his creativity. in 2007 he met bernhard korth, whose main attention was on creating ambient soundscapes influenced by synthesizer pioneers like klaus schulze. while matthias' emphasis is focused on programming complex rhythmical structures, bernhard loves to create endless evolving pads and dreamy spheres to get lost in between time and space. together they create a very atmospheric mixture of minimalistic rhythmical structures and lush ambient sounds.

'probe' displays a perfect balance between elaboration and improvisation, as each track was recorded directly onto hard disc. zero degree have the talent to abduct the listener into a distinct sonic universe, as calm and dark as outer space at the same time. ethereal key sequences are combined with deliberate minimalistic grooves that expand and contract around the listener, while sometimes well-selected vocal samples add a mysterious, haunting touch. the organic, fluid construction of tracks provides a constant ebb and flow and a special subtlety that is worthy of some quality time in a darkened room at night.

with 'probe' zero degree present a well rendered and mesmerizing release that should be able to bridge the gap between a number of electronic music styles and will draw in fans because of its excellence rather than its strict adherence to any narrow categorization. an album which will catch your attention right from the first time and grow with subsequent spins - ageless sounds composed with patience, knowledge and creativity.