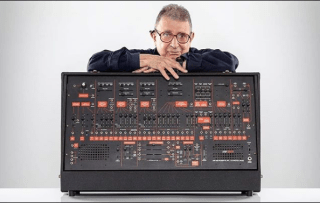 “[This Saturday is] the long-awaited premier of Alex Ball’s documentary: Electromotive:The Story of ARP Instruments. “Last May, Alex Ball contacted me, asking me very politely (no obligation) if I would “if it would be possible to ask you some questions about your father and about the ARP story in general?”. “Little did I know would lead me to this place; that nearly a year later, after an “odyssey” of explorations, introductions and reconnections with people I hadn’t seen or spoken to in 4 decades I’d be able to announce the world premiere of a documentary that completes one of personal goals I had when I started the Foundation. I had wanted to tell the story of ARP in a way that displayed the successes, skills, talent and vision that my father had, and that was emulated by a group of passionate engineers, technicians, employees and musicians.