The 45 Tribute is a compilation to pay homage to the late Daniel Hansson, co-founder of Elektron Music Machines. There are 30 tracks from many well-known artists including Autechre, Dntel, Venetian Snares, Daedelus, Kim Hiorthoy, John Tejada and many more. The release also contains exclusive contributions from: The Sea and Cake, Boom Bip, Tiga, Proxy, John Starlight and others.

The album will be distributed digitally and has a $5.00 cost attached to it. All proceeds will go to the World Wildlife Fund, a cause Daniel was passionate about. Additionally, there are over 25 free songs available for download.

The compilation consists primarily of electronic oriented music but it isn’t specific to any sub-genre.

Project History: The 45 Tribute started as an idea of a member of the Elektron-Users.com site last October. Several people from the community wanted to pay homage to Daniel and his genius. We then reached out beyond the Elektron-Users community and asked many well-known artists to participate. With Elektron’s blessing and the generosity of the artists, we were able to make 45 Tribute – For Daniel Hansson a reality.

Song Selection: Many of the established artists were asked if they wanted to be a part of our project. Additional songs were submitted from the Elektron user community. We received so many songs that we established a panel to vote on which ones should be included in the release. Since we received so many submissions, we created the ‚Free Songs‘ section.

Name Significance: The name of the compilation is inspired by Daniel’s old C64 demo group called Zone 45. Apart from that, it was also his favorite number.

Elektron is turning ten in 2008. Depending on your perspective ten years is or isn’t a long time. A ten year old cat is past its prime, while a red wood tree of the same age would only be a sapling. Elektron is neither animal nor plant, so to us ten years is a fairly long time but still only the beginning of a long and exiting journey. Here’s a brief recap of the story so far!

It actually began back in 1997 when a couple of students got together during a university course at the Chalmers University of Technology in Gothenburg and made a rough prototype of a synthesizer. The special thing about this sound module was that it was based on the sound chip found in the Commodore 64 home computer. The prototype was further developed and was finally housed in an aluminum casing, looking more or less like a real product, but red!
The little synthesizer, called the Sidstation, was initially made in a test run of ten units. The project was deemed commercially viable so in 1998 a company was started to nurture it and Elektron was born.

The newly founded company received funding from the university in-house venture capital investors Chalmers Invest, which made it possible to start manufacturing the Sidstation on a larger scale. The university provided Elektron with an office and thus things started to roll.
The Sidstation quickly became a cult synthesizer as nothing like it had been available before. It sold in respectable quantities, but Elektron was already developing its next product.
In the end of the nineties the hardware drum machine market was next to dead, meaning a void existed just waiting to be filled. The immense task of creating a rhythm box suited for the 21th century began.

It took three years until the Machinedrum SPS-1 saw the light of day. The electronic music scene was taken somewhat by surprise since a percussion synthesizer wasn’t really expected from the company behind the retro-sounding Sidstation. Nevertheless, the fresh approach to drum sequencing and synthesis proved to be something that was greeted with open arms.
Still lacking was a proper synthesizer. Inspired by the success of the Machinedrum SPS-1 and its take on interface design the work with a new project began.
The Monomachine SFX-6 keyboard was born one sunny September day in 2003. It was a sibling of the Machinedrum but with its own unique personality. Where the Machinedrum mainly dealt with electronic percussion, the Monomachine took care of the more melodic side of things. The Monomachine SFX-6 was soon followed by the SFX-60 tabletop version.
After the release of the Monomachine, Elektron parted with its investors making the company a privately owned corporation.

Ever since the release of the Machinedrum, users had been asking about the possibility of using samples in the Machinedrum environment. This was exactly what happened in 2005 when the Machinedrum SPS-1UW was added to the Elektron line up. This model was a huge success and still remains the biggest selling Elektron product.
The Machinedrum SPS-1UW used the midi ports to transfer samples back and forth to a computer. Due to the limited bandwidth of midi this could be a quite tedious task, which is why the tm-1 midi interface was brought to the market. It allowed midi transfer times to be sped up ten times, offering quicker sample management for the SPS-1UW.
In late 2007 the Machinedrum and the Monomachine were updated to MKII versions. The units got new looks, better hardware specifications and improved functionality. They were of course 100 percent backwards compatible.

So what does the future hold for Elektron? That’s for us to know and you to find out, but rest assured we’re always hard at work on new, revolutionary products!

Track Previews: All the tracks can be previewed via the website. Here’s a few for preview/review: 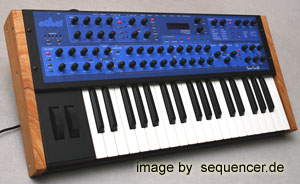