en
Cinema as an audiovisual experience – Music for Cinemas (based on Brian Enos famous ambient work) pushes the screen to the background to make room for spacious sound explorations. Monthly, we’ll present three artists who are going to perform live featuring their own visual accompaniment.

Unfortunately, the Filmrauschpalast is not barrier-free. Please contact us if you need any assistance via musicforcinemas@filmrausch.de


Ekin Fil (Istanbul)
Ekin Üzeltüzenci has started her music career with playing keyboards and singing in bands. She has been releasing albums on LP/digital and cassette formats on American and English labels with her Ekin Fil project which she’s started in 2007. She has performed live in various cities in countries like Germany, Poland, Belgium, Malta, Austria, Holland; invited to play respectable festivals such as Le Guess Who? and Heart of Noise.
Ekin loves to bring acoustic elements like guitar with electronics in a minimal and affective ways. Apart from her solo albums and other recordings, she has been composing music for short and long feature movies for a while.
“Ekin Uzeltüzenci is a Turkish musician from Istanbul who creates an eerie sound that exists in a twilight zone – a paradoxical limbo which feels deeply personal and yet distantly alien.” Fluid Radio
She was awarded "best original film music" for her first movie soundtrack "Kaygı" at SİYAD, 2017. Also she was awarded best film music for the soundtrack of Korfez The Gulf at Türkisches Film Festival at Frankfurt 2018.
http://ekinfil.bandcamp.com/


The Karmic Laws (Berlin/Erfurt)
The Karmic Laws is an original collaborative audio-visual performance between Erfurt based animator and film-maker Marcus Gryszock and Dirk Markham, a Scottish musician resident in Berlin.
For The Karmic Laws Gryszock presents visuals in a form not usually associated with live performance, namely stop-motion animation. This gives audience members a rare chance to glimpse behind the scenes of this oh so meticulous process, while the moving image is constantly looped and seen to develop before their very eyes. And so a double narrative ensues: the on-screen character manipulated live, and that of creator as performance.
The soundtrack is provided by Markham who also uses a strictly real-time process with no parts prepared in advance. All loops and samples are created from scratch using processed guitar, effects and samplers in the moment and layered to create an evocative soundscape of ambient drones resulting in an instant composition.
Each performance brings them closer to their goal of creating a full length music video based on the live stop-motion animation created during their performances. 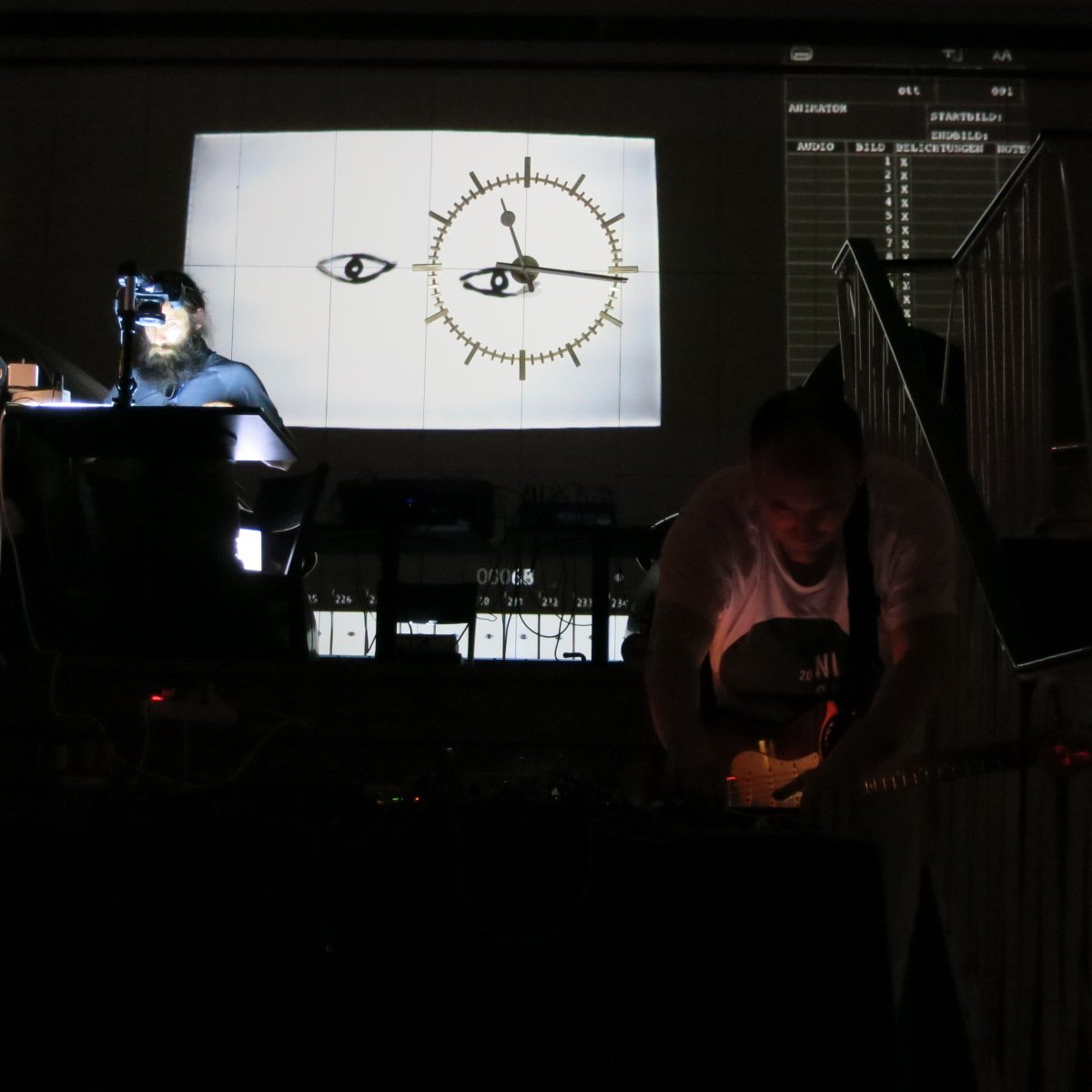 The Karmic Laws is an original collaborative audio-visual performance between Erfurt based animator and film maker Marcus Gryszock and Dirk Markham, a Scottish


Emme + Duperhere
Emme (Modularfield) is an electronic musician, producer and live performer from Argentina, based in Berlin.
Emme takes her musical influences from all things science fiction; using a mixture of hardware controllers and synths she creates beautiful, soaring space-scapes and deep sonic explorations inspired by such diverse topics as Astronomy, Carl Sagan and artificial intelligence.
Every live show is unique, adapted to the venue and concept of the event, creating an immersive sound adventure with a wide sonic palette which moves between ambient, floating soundscapes, powerful melodies and energetic rhythms. Joaquín DuperHere, is a visual artist from Chile. He works with paintings, sculptures and tattoos where geometry and textures are related to each other. His work is located in different infrastructures, both public and private and is strongly influence by graffiti. For Music for Cinemas DuperHere will collaborate with Emme for an audiovisual performance.
https://www.emmemoises.com https://store.modularfield.io/album/into-the-darkness instagram.com/duperhere