Behind the Blue Room > OUT NOW!

Bernd-Michael Land (b. 1954) aka Aliens Project started making music in late 1960's, first on one of the early transistor organs and then switching to synthesizers while playing in various Rock bands. Parallel to that, he also started his solo career that saw him building his studio piece by piece, adding some sophisticated modular synthesizers to his setup. Since then he has released several cassettes and CD's, worked for sample libraries (among them "Bad Samples", "Australian Collection", "Bionics" and Toy of the Month" series) and collaborated with several artists, including Coco of Programmierte Welten. Behind the Blue Room is his latest effort containing 16 tracks. It starts with "Battlefield of Thronos". Deep pads set the stage for this moody piece of music. A strange, echoing rhythmic sound appears, while the piece remains cosmic, atmospheric and calm. The rhythmic elements become more prominent. However, the piece never really takes off, instead going for an even more ambient sound, rain effects and various concrete textures / nature sounds. "Orbiter" begins with cosmic effects and noises. More concrete textures are added to this piece which is essentially a relaxing ambient soundscape. Nice one, if somewhat short. "Snorff" consists of a base of deep, slow rhythmic pulses, supported by nicely programmed pads. A few cymbals and drums are added to this otherwise very floating piece. "The Kingdome Come" features a slow, heavy rhythm and some very tasty pads, combined with a crying analogue lead line. Surprisingly, the piece ends with random effects and mysterious voices. "Death Wally" has a spooky atmosphere with all sorts of ghostly voices and wind effects. I suppose, this piece could be called Dark Ambient. It is also one of the most interesting pieces, if somewhat trite. "Thai Connection" promises to be an ethnic-flavoured piece, and indeed it features some ethnic percussion, but that's pretty much it. The rest consists of Mellotron flutes, darkish cellos and string arrangements. I also like the echoing atmospheric pads on this one. A nice piece with a loungy atmosphere, sort of like Edgar Froese's Epsilon In Malaysian Pale played by a bunch of Cafe del Mar guys in a Thai forest. "The Big Race" is a short interlude with atmospheric effects and cosmic sounds. "Lost" features very effective pads and melancholic electric pianos. Deeply ambient and a bit disturbing. "Jump Monkey Jump!" has a bit of a Kraftwerk flavour, with funky bass lines, sharp synthetic rhythm and quirky melodies. Thankfully, it's not very "Techno", having more of that 1980's Electropop atmosphere to it. "Timeswitch" is totally cosmic, with all kinds of effects, pads and twittering. There's also a slightly heard bass pulse running throughout. "Countdown" has an interesting synth line that runs through it and some mesmerizing pads. "Highlander" is dominated by fast harpsichord-like arrangements and organ-like pads. Interesting piece and a stark contrast to the rest of the music on this album. "Steps" tries to convey a scary atmosphere, with stomping effects, atmospheric synth sounds and ethereal choirs. On the other hand, the next piece called "Black Planet" is where the drama really shines through. This piece is so intense and cosmic, it's amazing. What we get here are basically dark synth drones, resonant effects and melancholic pads, all merged into a cosmic miasma of sound. A blistering analogue lead line is a welcome extra to a track already crowded with all sorts of sounds. A relaxed rhythm runs through the piece during its second half. "The Eagle Has Landed" consists of a looped rhythm and a slightly ethnic-sounding melody. There's also a bit of (sampled?) Hammond organ. "Flock" concludes this album with abstract effects and somewhat mysterious atmosphere. After a while, a sharp synthetic rhythm starts, along with a Kraftwerkian bass line. A nice minimal melody supported by a jazzy electric piano brings this track to a close. Overall, Behind the Blue Room is a diverse album made by a talented musician who is certainly one to look out for. It will be enjoyed by a wide audience. Best track: "Thai Connection".

Bernie schrieb:
...Behind the Blue Room is a diverse album made by a talented musician...
Zum Vergrößern anklicken....

Bernie schrieb:
...Behind the Blue Room is a diverse album made by a talented musician...
Zum Vergrößern anklicken....

Ok, I am honest, when I received the newest release called “Behind The Blue Room” of Aliens Project based near Frankfurt I was really sceptic. The artwork and the press pics looked different to all those you receive from the mainstream and modern labels. But after reading the info and listening to the album I had to change my first impression. Aliens Project is a musical experience with background and history. Founded in 1974 this genius project creates synthetic music with a human touch. Synthmusic with soul, a futuristic vision and with soul, far away from the mainstream electronic music.
“Behind The Blue Room” is a fascinating album that takes its listener by the hand to another dimension. Dreamy, laid-back soundscapes telling visionary stories. Listen and dream music without any compromise. I love people who walk their own way and do what they got to do. These fifteen wonderful tracks, no songs based on genius soundscapes, own a unique identity and sound. Handmade synthesizer music will never become out of fashion as long people keep like Aliens Project invest all their love, talent and time in creating such a nonesuch album. Don’t be misled by the fact that they are using synthesizers in the way Klaus Schulze or Kraftwerk did it decades ago, this music comes straight out of the soul of its creator right into the electronic circuits of the synthesizers, this isn’t a revival this is genius. A wonderful and mesmerizing album owning a unique organic and nonesuch sound.
A perfect ten. 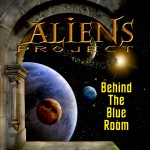 Aliens Project - Behind the Blue Room