In the following, we use the following mark convention:
(***) for new features,
(**) for evolved functionality, and
(*) for minor changes. 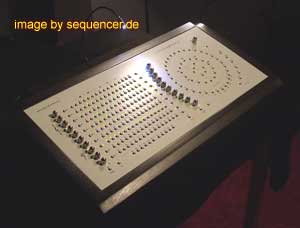 FREE TRACK CHAINING (***)
Tracks in a Page may be chained according to any
configuration desired by the user.

EDIT TRACK DIRECTIONS (***)
Directions 6-16 are freely editable by the user, including
re-trigger and randomize options.

STEP GROOVE ATTRIBUTE (***)
A step may be delayed at playtime by a random amount
of time in multiples of 1/192 of a note.

GRID-TRACK MODE (***)
Up to 90 tracks are mapped to Matrix buttons and act as
virtual track selectors allowing for direct track operation.

STEP-NOTE RECORDING (***)
Notes may be recorded directly on pre-selected positions
in a page, irrespective of timeline and chase-light position.

PAGE SCALE CAD (***)
Changes to a scale may be set to affect the pitch values of
the tracks in the page. Whenever the scale is modified, the
track pitches are aligned to the new scale, modifying the
harmonic structure of a page in a musical way.

VAST MIDI-IN CONTROL (***)
Apart from recording MIDI data, MIDI IN ports can be
used to control various functions of the machine via MIDI IN
signals. This includes selecting grid sets and toggling grid pages
via program change messages, or even creating and modifying
scales on the Octopus – all at runtime of course.

VIRTUAL MIDI CHANNELS (***)
Provide an internal wiring of tracks to the Octopus MIDI in.
In this way, Octopus tracks may be used to leverage the
capabilities of MIDI IN control, right on the Octopus.

MAP FACTORS (***)
Each relevant attribute map now has a map factor, which indicates
the amount to which that map is applied to the current output.

EXPORT CONTENT TO SYSEX (***)
Memory content may now be exported as MIDI system exclusive
streams, providing a means to store machine state data outside of
the Octopus.

PITCH BEND HANDLING (**)
Now pitch bend data can be recorded and worked with, similarly
to any other MIDI controller data.

TRACK FLATTENING (**)
The FLT mutator has evolved to new semantics. It is now applied
to two or more tracks to create a „stacked“ version of that track
selection into a single track.

NEW EFFECTOR STATE (**)
Tracks can now take on an additional state with regard to the
Effector. In addition to being unaffected, a sender, or a receiver,
tracks may now be receiving senders.

CC MAP LEARNING (**)
In addition to programming CC maps, you can now have them
learn by listening to MIDI IN input. Saves time and comes in handy.

FORCE TO SCALE INPUT (**)
Externally played notes can be passed through the Octopus and
forced to the scale of the current page.