Alternative Midi Controllers are a number of non-standard OSC or MIDI Controllers that can control any parameter in a Synthesizer or Sequencer. Here is a List.

INNOVATIVE AND OTHER CONTROLLERs here's a new place (we/I will fill it up over the next days) with some interesting non-keyboard and standard controllerbox kind of controlling parameters with all your senses..

offer Modules http://www.sequencer.de/blog/?p=7134 with FSR or sensors of any kind with or without pressure or position recognition.

btw: there is also a software by STEIM to turn ANY USB DEVICE into a controller..

a morphing controller (in german only) that offers to control any controller set by onle one knob like the nord lead and nord modular / g2 series as an external box Link: [1]

the Dimension Control "d-beam" is available on some Roland products such as the Roland VSynth (keyboard only), MC909 and others. It reacts to the distance of any body part (or something else) to the controller and can be played quite exactly. since the vsynth has 2 of them it is nice to have 2 parameters under control that can be controlled and modulated by one hand or just 2 or 3 fingers.. the d-beam is 1 dimensional but you can narrow the "beam" from any direction.. the alesis version measures 3 dimensions of your moves and so the position of your hand controlls the output of 3 controllers. the Air FX and Synth series do not have midi ,so they only use it for internal functions. but the newer remote keyboards can do. there are some other boxes (all in the us), one if it being the inventor of the d-beam himself "Eyris" from http://www.synesthesiacorp.com and another machine, that works quite similar. it's a shame that Roland never had a twin (!) d-beam box for sale.. not even a single d-beam.. see my live performance on Dada-Inn (30.4.2005) or/and Moogulator (2005), if you like a video .. (check video sections..) 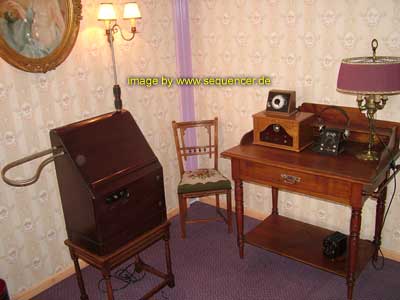 and bio feedback, measurement of alpha waves in your brain.. hard to control, especially on a stage or with a lot of people in the place..

simple things like the wacom tablet or the cinqtiq screen that can be used with a pen - directly write on the screen (virtually) etc.. for music?? well.. the pen is pressure sensitive and both ends have different functions.. high price.. 2500€ for a 1600 pixel wide screen with sort of ribbon on the left upper corner (zoom).. made for painters.. but..

..imo the mouse is one of the most overrated controller.. there should be more contact to the diaplay / the picture itself.. and why it is still 2D only? ...

it has poly pressure and is a pad of sensitive pads/keys. http://www.thummer.com/ 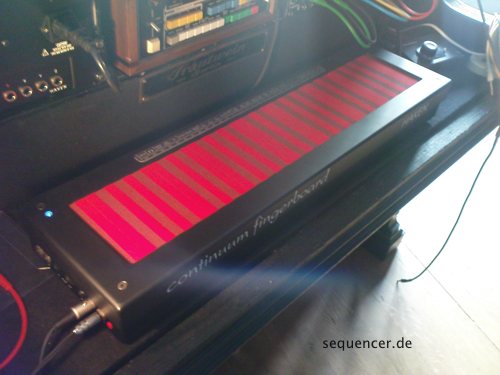 Surfaces and Objects based Sequencers

Solution one: Sonys Block Jam, which is some sort of LEGO™ that communicates.. means: one segment of it is a "chase light" or a direction that can be connected to any of the 4 sides to other segments. there a switches and coloured lights that show you what each of it currently does.. so the whole thing is a sequencer Sony Block Jam Video: http://www.csl.sony.co.jp/IL/projects/blockjam/index.html

here was one by doepfer (mogli data glove) which is discontinued and another new one still for sale: the midiglove from noDNA http://www.nodna.com/ some videos from my visit. the glove can have each finger bend as a controller, each finger has a touch sensor and a thing that checks if you shake your hands or nod it some way, so it is 12 controllers. additional to that you can controll program changes or any other things by a gestur like a nice "fuck you" for reset it all or send the loudest note you have. they can be trained in, atm it is pc only. they also sell robots of all kinds. videos: http://www.sequencer.de/movie/midi_glove_bend.MP4 and http://www.sequencer.de/movie/touch_glove.MP4 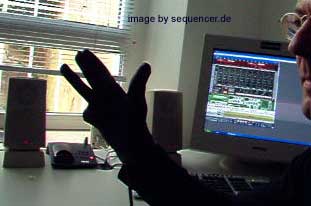 Multitouch - guess what? of course the 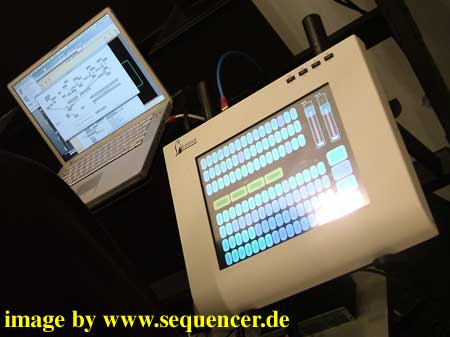 the "enterprise controller": touch screen TFT lemur from jazzmutant http://www.jazzmutant.com/ this one is a 800x600 Pixel Screen you can touch with all your fingers (and more) and control many more than just one parameter with 2 fingers (knobs): there are rubberbands, balls with fricton and refelction at the wall (real physical bounce) and they can have a "lifetime". there are of course sliders and buttons like on enterprise NCC-1701D and E =/\=. it communicates via ethernet / IP and uses the OSC "standard" (well ,that can be read by reaktor, Max/msp, PD etc, but it can not send controllers but via a very simple helper in reaktor, max etc.. it can change it all to midi or even higher resolution) it is in fact a tft with a computer and net connection aboard. 2k€ is not cheap but it is really a cool control toy.. all controll "fields" can be set up by yourself (of course..) 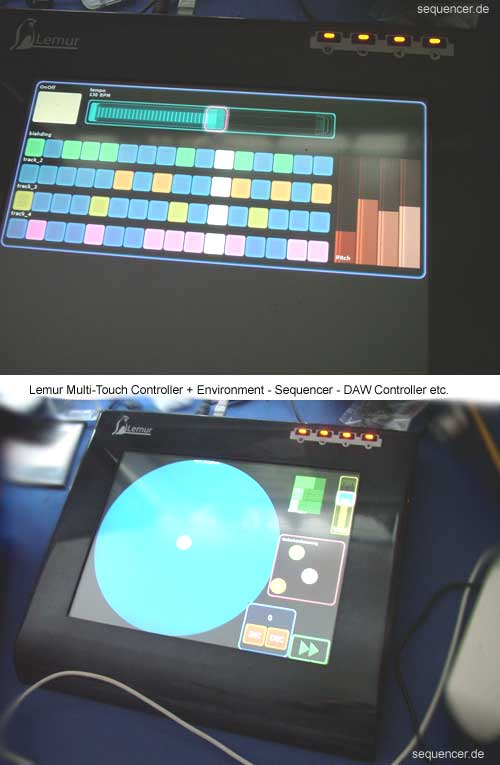 The Jazz Editor for Lemur: 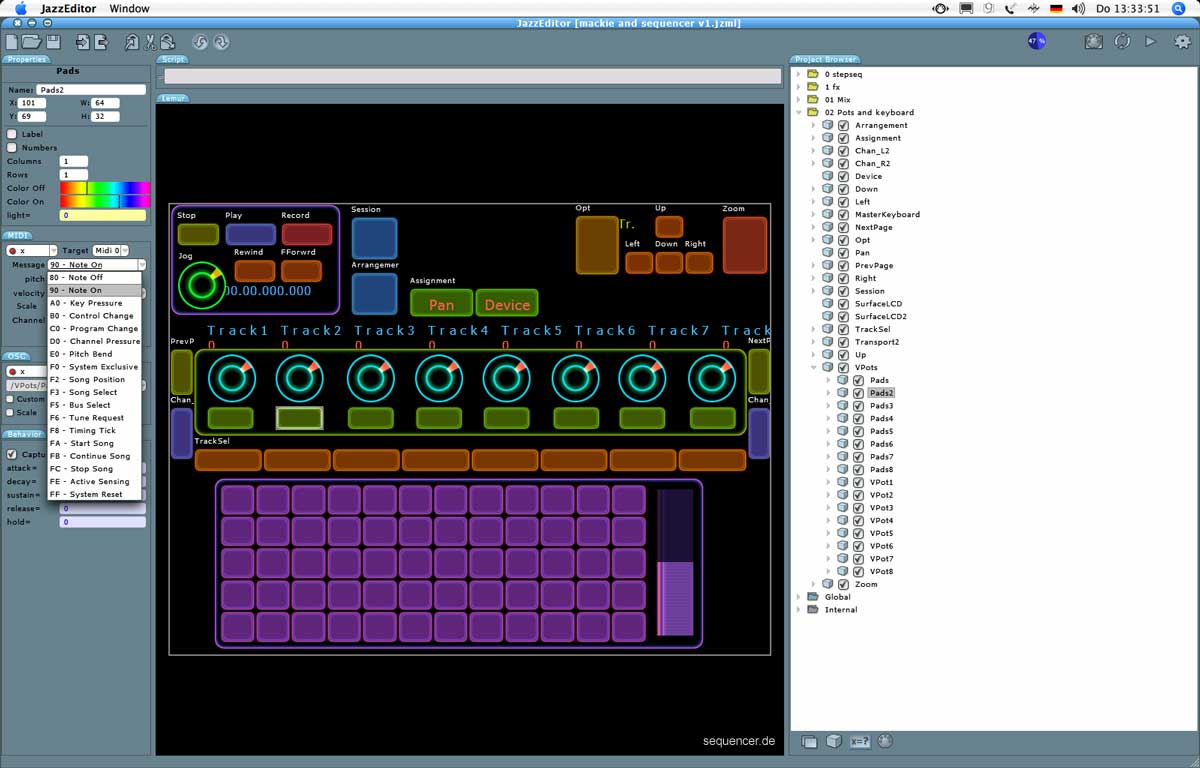 James Patten has a thing I call Light Table Controller: He calls it "Audio Pad". It has a Projector Beamer above a Table on which you push round little "cursors" around (don't know if they are inductive and scanned by the table or recognized by a camera and detection software) if has menus that are beamed on the table which control the sound and music, so it is in fact an intaeractive sequencer where no mouse is needed but "ice hockey"-kind of "push around"-plastic.. ehmm.. objects ;) it is more a complete arranging and improvisation performance controller than just a "midi controller". Video: http://www.jamespatten.com/audiopad/vid1.php Video: http://ia201107.eu.archive.org/2/movies/Audiopadaudiopadsmallwebmov/audiopadsmallweb.mov

Howdy! Keyboard- Reloaded: hey, why don't you manufacturers do not make keyboards where the keys themselves are 2D fields: means: the higher my finger slides, the higher is the first controller, same with left to right, so he first Third of a key is a 2-way controller plus note on/off plus velocity.. since you can pres the key down you have to "borders" of the neightbour keys, when you touch them, you might be able to use these as 2 special controllers for things like FX etc.. so they keyboards is something for electronic musicians and not only pianists.. and don't forget: they are 3 octaves!!