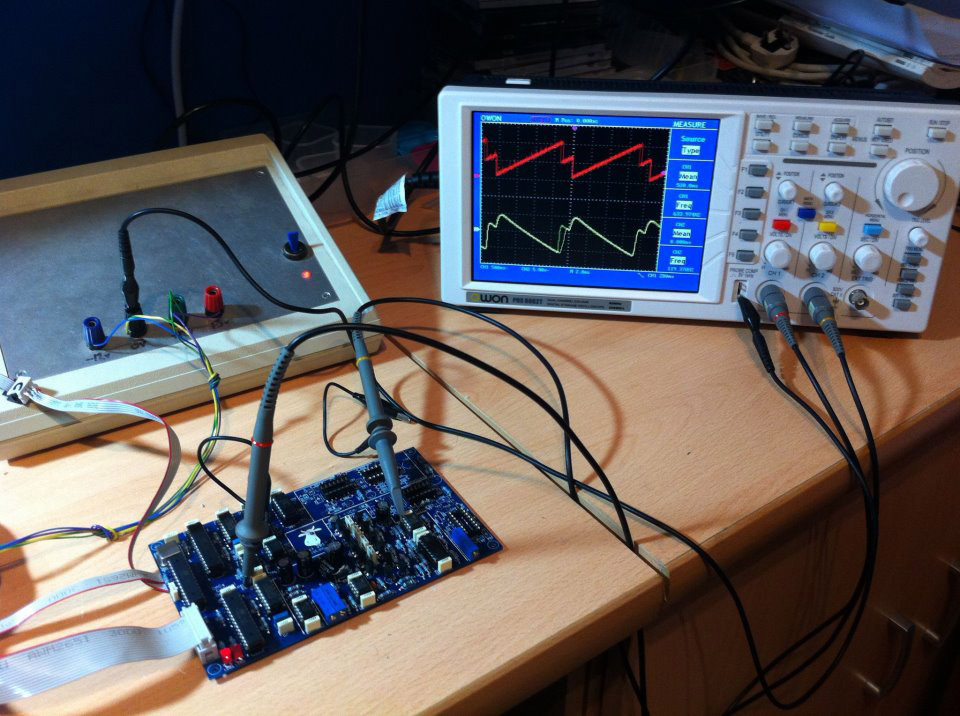 Well the last three Zira’s sold fairly quickly, so there’s 20 of them in the world, one of which is mine and I’m not selling it this time, like I did my Monowave.

So, What is Aurora?

Well, my band (Her Dark Embrace) recently went into the recording studio to record our EP. The Engineer was very into electronics and synths and we had some great chats. He asked the question “So, you play keyboards and you build synths, so why don’t you use your own?” Really good question I thought, I replied “Everything I play is chords/pads and I’ve only built monosynths, I’ve never built a polysynth.” to which he asked “why not?“, I had no answer.

So I thought about it and I’d had the basics of a monosynth design on the drawing board so to speak, so whilst on holiday I finished the design and when I returned ordered some PCBs.

Over the last month I’ve begun building a single voice board, first an oscillator, then I ported the code from the oscillator chip in Zira and modified the code, so I have two oscillators with 56 waveforms a piece, with hard sync and adjustable mix.

Next up I added the control CPU, this will be generating the LFO, ADSRs and all the modulation as well as controlling the VCF. It didn’t take long to get the basics working.

Then I added the DACs, I’ve used the DACs on a number of projects now including Zira and GorF-XL so that only took a few hours.

This week I’ve added the VCF components to the PCB and got the VCF working, so it’s making very satisfying “beeoowwwmm” noises.

Next up is to add the resonance VCA, final VCA and a couple of other parts. After that, it’s the coding to do, that’ll take the most time.

If you want to keep up with the latest, keep an eye on my facebook page (https://www.facebook.com/VacoLocoInstruments as that’s where I do most updates, but I’ll try and keep this blog up to date more often.
Zum Vergrößern anklicken....

Zira came out of an idea I had to see how small I could build a synth and still get it to sound good. The prototype is based on the Korg NJM2069AD Filter/VCA chip, the reason for this being I had 8 lying around I bought a while back from Korg to build a polysynth with.

There are a small number of these being made, I will be selling these as fully assembled modules with a case.

However, I fully intend to try and replace the NJM2069AD with a discrete filter and VCA of some kind (currently a 2 pole State Variable Filter based VCF and simple VCA is looking good) and turn this into kits in much the same way as I did with GorF.

A quick summary of it's features;

When kits are available, I'll be posting on my blog, though don't hold me to it, this is just a hobby.

" I’ve begun building a single voice board, first an oscillator, then I ported the code from the oscillator chip in Zira and modified the code, so I have two oscillators with 56 waveforms a piece, with hard sync and adjustable mix."

" I’ve begun building a single voice board, first an oscillator, then I ported the code from the oscillator chip in Zira and modified the code, so I have two oscillators with 56 waveforms a piece, with hard sync and adjustable mix."