In this historical video excerpt, David Vorhaus talks about two of his analogue inventions – the MANIAC analogue sequencer, and the Kaleidophon from 1979.

The MANIAC (Multiphasic Analog Inter-Active Chromataphonic (sequencer)) was an analogue sequencer having variable step lengths, and the ability to split sequences into several smaller groupings giving considerable sonic potentiality. Addition and subtraction of events was possible, as well as the possibility to chromatically correct the output during performance. David could program his MANIAC sequencer to play a background rhythm or combination of musical events, to then improvise over the top with another instrument or synthesizer. Forum

The Kaleidophon was a double-bass-like instrument using four velocity-sensitive ribbon controllers instead of strings. The instrument is played entirely using the left hand, leaving the right hand free to manipulate the sound via a number of controllers and a joystick.

David speaks about the processes of making electronic music, and the developments that such possibilities can provide for the imaginative electronic musician. This excerpt is taken from the BBC 1979 documentary entitled „The New Sound of Music“ hosted by Michael Rodd. 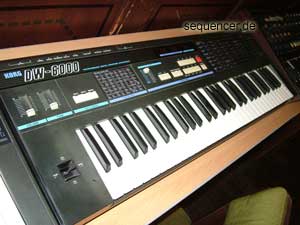