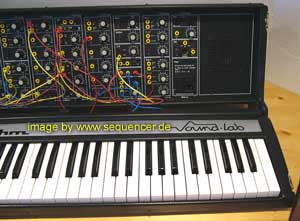 in 1979 theBöhm Soundlab by Professor Enders (University of Osnabrück, Germany) & Oliver Kellog was released.Böhm is now officially bankrupt -> insolvency in 2006.

THE BOEHM SOUNDLAB
uses banana jacks and is quite interesting / flexible.
it provided multi mode filters when HPF,LPF,BPF combinations were still rare.
böhm is a german electronic organ company for DIY kits and other stuffs from minden in germany. biggest competitor was wersi ;)find a nice info about the soundlab in „Synthesizer von Gestern Vol.2“ by M.Becker who also released 3 CDs feat. Vintage Synthesizer Tracks . 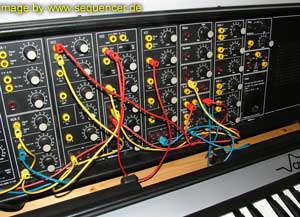 the Dr.Böhm Soundlab was the only synthesizer by böhm beside the böhm „Dynamic 24“ expander with Casio-type of PD synthesis , in this case phase modulation meaning phase distortion which is very close to FM.

the soundlab is quite rare and boehm offered DIY Kits and assemlbled ones. 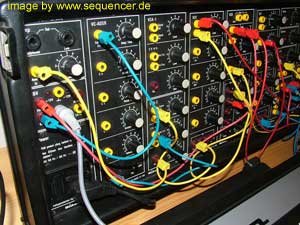 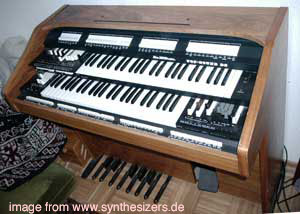 the non-info
btw: as Consequence / Moogulator I started with a
DIY Organ Kit from Böhm, the Top Sound DS had envelope
(the fx register) for all sounds one env, same with a kind of LFO
for repeat FX and a spring reverb, very 80ies, made in 1979

incl „Böhmat“ the Drum Machine of this monster.. drawbars on both keyboards