Korg iMS-20 Turns Your iPad Into A Vintage Synthesizer »

so there is an MS20 now, this time it looks like one,
here’s how it sounds – and you don’t have to limit to 12 steps and forced to „reggae“ all your songs, it has a 16step sequencer. the demo sounds more clean compared to the original, but this is just one demo with just one sound. and it doesn’t sound bad at least. can some1 confirm this? 16€ with TR 16step sequencer. nice! at least maybe the one that makes you buy an iPad? I thought twice about it. but let’s check the real performance things, MIDI-stuff to make it more playable first. possibly get more steps like on the tribes to make real full tracks.

No Compromises by iNALOG

this tells you more about it’s sound. 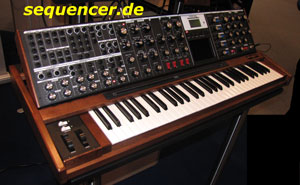