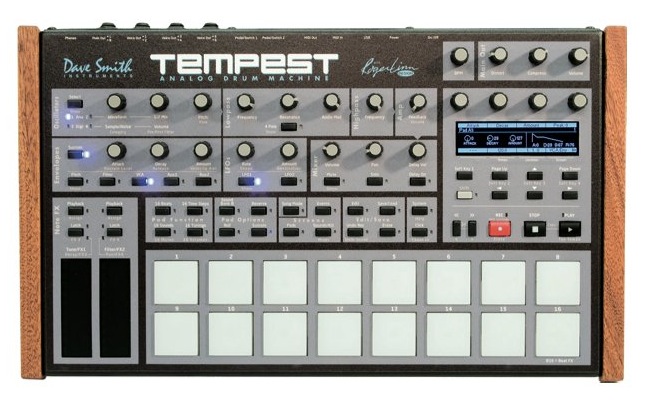 Remember the Boomchik from Mr Linn and Mr Smith? It’s here, but it has a new name at NAMM 2011, looks nice. it’s 2 analog and 2 digital Oscs. lpf filtering (analog), hpf 2pole hpf (like other DSI synths got). analog distortion & compressor (hey) and 16 Pads, 2 Ribbons.So it’s sort of analog Groovebox – sounds good as I can tell from a YT video..

this gonna be seen in the clubs over here, I guess..
SAMPLES can be used as well – but possibly in the second run/update –  which is important to know, don’t know how long the patterns can be but sonically this is worth a look, don’t know if you can record without stopping it etc.. but there’s step progging in it Roger Linn says at 5:40.Since it is enough Pads you can also tune them. IT GOT DYNAMICS!

here’s how to program it – the TR-style (there’s no position light but you can set the steps individually, like on the Radias)

here’s another more basic introduction by the nice guys themselves..

important notes from something or somebody called pym via forum:

1. There will not be user sample loading in software version 1.0, it may be added in 2.0
2. The sequencer will have a lot of functionality; basic structure will be up to 32nd Triplet resolution and a loop length of up to 8 bars
3. The sequencer will be able to record pitch, velocity and duration, plus 4 assignable parameters per sound (you have 16 sounds per beat, each with it’s own sequence). You can record those parameters by live knob movements, using the sliders position or pressure, external MIDI, or pedal inputs
4. There will be nudge options for the sequencer, as well as moving the whole sequence over by one step. Seriously I can’t count how many times I started making a beat and realized that the 1 was somewhere in the middle… drives me nuts when I have to redo the whole thing
5. The touch sliders have both position and pressure response, both are assignable.
6. There are several CPUs in the Tempest, a PIC32 running at 80MHz is the main processor
7. You can indeed use the Tempest as a 6 voice synth. You can ALSO use the Tempest as a 1 voice synth and have the other 5 voices playing drums (or 2 1 voice synths, or 1 2 voice synth, or any combination thereof). So hook up a keyboard controller, assign a pad to one voice and a MIDI channel, then you can play a live bass or lead over the drums
8. You can definitely take the wood sides off the machine, the metal is folded down over the sides so it looks just fine and rather sleek with the wood off. If you like I’ll take a picture for you guys when I get back home.
9. Waveshapers? I’m not exactly sure what that’s about, if you elaborate maybe I can answer. It has no digital FX in the path, it’s all analog except the chip doing sample playback
10. It will be rack mountable, but I’m not sure whether or not we’ll include them in the initial product. I’ll get back to you on this closer to production
11. There probably will not be an editor on release but if someone would like to start one I will give you the CC/NRPN layout and all Sysex functions as soon as I code them in so you can get a head start.
12. There will not be a VST on release. I would love to have one, but the overall cost of doing a VST is far more than is worth it (mostly due to the support nightmare of so many DAWs and so many systems)
13. There are 2 pedal inputs, both can be assigned to either an on/off switch or a pedal CV input. These should handle drum trigger inputs as well (although we haven’t tested them with any yet)
14. Delay is being handled at a kit/mixer level so you will have one set of param settings for the delay and a send amount for each individual sound
15. At this time no encoders are assignable. The sliders position and pressure are however
16. The digital oscillators have a lot of options, but the DSP is less powerful than the chip we were using the Evolver. We will have the Prophet VS waveforms as well as a lot of noise options (some cool ones like green noise, UV noise, resonant noise, etc) for doing layering.
17. The Digital oscillator source will have a mix control for sending the signal pre/post analog filter
18. There’s no DSI MIDI controller in the works… we like our analog stuff
19. The LEDs are blue, not purple. They will not be as bright/piercing in the final version since we’ll have a translucent cover over them. Also we’re looking into cyan/aqua LEDs but it’s hard to find them
20. We could have made it cost less, like 1500-1800$, but it wouldn’t have the touch faders and the pads. We chose to make it slightly more expensive but WAY more fun to play
21. The build quality, if I do say so myself, is rock solid. Solid steel on the outside, pads are solid (not gummy or flimsy) and the knobs are the same as the Mopho keyboard. I’m sure someone who has checked it out here at NAMM can confirm this one way or the other
22. You will have some degree over controlling note stealing. You can assign a particular sound or set of sounds to a particular voice for example, and you can route that out the corresponding stereo output so it bypasses the compressor/distortion circuitry if you so choose. I also may implement some sort of customizable priority handling
23. LFOs and Envelopes are digital. They are twice as fast as our other synths so you get an extra octave out of the LFOs and much quicker envelopes. The LFOs have time sync
24. Each of the envelopes have a ‚peak time‘ parameter that holds the maximum of the envelope between the attack and the delay time. The param goes from 0-127 and scales from ms increments in the low amounts to about 3 seconds at 127. You can get really tight gating effects using the envelopes in this fashion
25. The 6 stereo outputs (1 per voice) are TRS jacks
26. There will be a mapping setup so you can use a mopho keyboard or prophet as a controller
27. The USB interface will be MIDI only in version 1.0. I may add file system support for samples in version 2.0, but I don’t want to get anyone’s hopes up yet. It cannot do audio over USB.
28. We do not have advanced features in the sample playback chip, however those are not out of the question for a future release. These include things like start/end point of loops and triggers, digital FX, sample reduction and bit crush, etc, etc. They would only affect the digital samples as there is no ADC in the signal path, it’s a fully analog path. However we do really want to add a ‚reverse‘ toggle for a sound which would affect both the analog and digital portions

These are things that I am coding into the structure of the sequencer but probably will not be in the initial release of the product:

1. Individual step delay and groove templates
2. External MIDI control from the sequencer
3. Individual sequence parameters such as sequence length and sequence swing per sound
4. Exotic combinations of time sigs (7/8 over 3/4 or whatever). The initial version will have the basic range of time sigs possible over the whole sequence. You could do 5/8 for example, or 17/32.
5. Sequencer playback modes like reverse

Hopefully that answers most questions people have had. I’ll take another run through them in the next couple days