In the World of Grains, Chapter 1:

"… When we look at the way how granular sound processors, namely granular sound processing software, are used, we might think this technique is practised either by quite old so called “serious” electronic musicians, or by quite young artists and producers, who are interested in spectacular effects. Either way it looks like being a quite young approach to working with sound. Being asked my oldest grandson told me that it was – maybe – 10 years ago, when musicians started to process sound on a granular basis, whereas one of my sons-in-law thought to know it better, when he claimed, that it was in the 1940s, when someone – he didn´t know the name – started using granular techniques with sound.


Both were terribly wrong – and so was I before I started preparing for this book.​
The idea of understanding sound as a more or less organised aggregation of short grains was firstly uttered by the Dutch philosopher and scientist Isaac Beeckman in the first decade of the 17th century, more than 400 years ago! …."


More about this ebook at http://dev.rofilm-media.net 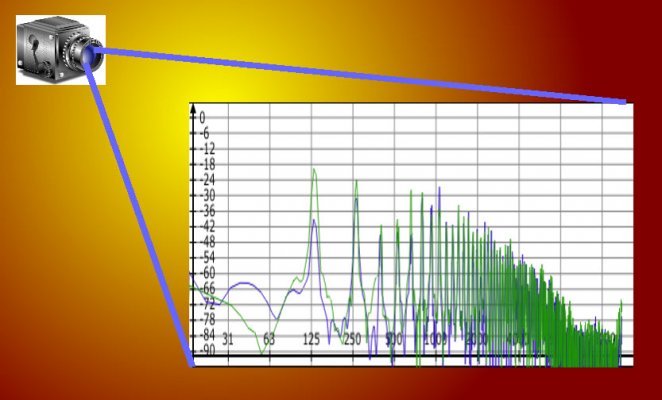 
Chapter 2:​
"...I prefer to focus on those computer languages and programming environments, which are of practical use for musicians, composers and sound designers of today.

The borders between the work of a composer, a musician, a producer, or a sound designer on one hand, and a “coder”, a programmer of computer software, and a producer of musical applications on the other hand have been blurred – more and more wiped out in the last decades. Great people like Curtis Roads, Barry Truax, Paul Berg and others have started it. They cut gaps in these borders, and made paths in the jungle of code, - as software might look like for a musician at first glance – which we can follow, develop, and use as starting points to reach our own goals..." 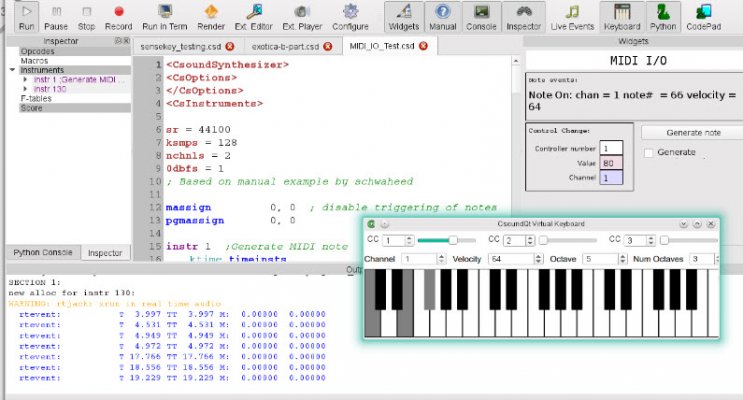 Chapter 3:​
"...When I planned this book and its individual chapters, I had thought to write - here in chapter 3 - about different practical ways of applying sonic grains to the processes of producing music, and of composing music, sound, and audible art. But soon I was to learn, what a mess and what a mayhem we come upon, outside there in the www, the wild world of wonderous conceptions of the matter of sonic grains.


Things get even more complicated because of the conflict between the agents of well planned compositions, seeking deeper sense and meaning, and aiming for rather intellectual pleasure on one side, and the ambassadors of mere sensual enjoyment, who are permanently endangered to get lost in delirious orgies of – quite often – shallow sounds on the opposite side. A conflict beloved, fostered and cultivated by both parties – and that for a quite long time. It´s nowhere else than on the field of sonic grains and their applications where this conflict is fought out most virulently. This factum might not occur to everybody, because one of the strategies – followed by both sides – is a kind of “actively ignoring” each other.

These are the reasons why I decided to add this new chapter 3 to the plan of my book. Let me start doing, what the headline of this chapter is asking me to do. And perhaps you will find something in this new chapter 3, something that may well pacify even the mentioned conflict..."

More about this ebook at http://dev.rofilm-media.net​

"...Traditional classic, neoclassic (and pseudo classic), and most of the modern approaches (20th century) to composing fail when it comes to grains. They must fail, because they are either based on the assumption, that pitch and timbre are fundamentally different aspects of music, or on the assumption, that time and pitch are fundamentally different, but unchangeably connected when it comes to using recorded sonic events in a composition.​
Both assumptions turned out to be wrong, when grains entered the scene.

And another divinity of generations of scholars of music schools was reduced to a merely helpful friend (if at all): musical forms (and rules).
So, blowing up the chains, erasing the borders between pitch, timbre, time, and frequency, and even challenging musical forms and formalism in general – grains brought absolute creative freedom, didn´t they?

Well, they brought chaos and disorientation in the first place, and the shrapnels of the granular explosion are still flying, now more than half a century later, causing sybaritic manners searching for shallow fancy sonic effects on one hand, or leading to pallid sonic pseudo-intellectualism on the other hand quite often.


So, let me talk about musical forms, compositional rules, techniques, and approaches a bit now..."​
More about this ebook at http://dev.rofilm-media.net 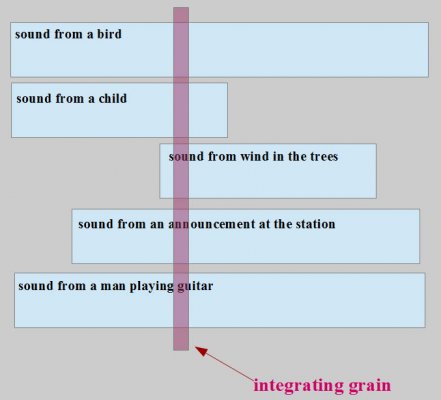 "...Sounds in motion, that is the domain of granular approaches.​
But isn´t there something basic on the field of grains, which could eventually take over the role of Fourier Transform spectra (like the above shown), or the role of at least the basic wave forms of classic synthesizer soundworks: sine, triangle, square, pulse and saw?
Isn´t there something basic and easy, which I could at least approximately use like these “Lego bricks of producing audible art”?

To make it short: No, there isn´t. None of the bunch of parameters, that I mentioned in the chapters before is able to serve as something that simple. It´s either to static (like taking the pure length of a grain), or neither generally valid nor easy to apply to a larger number of compositional or sound designing situations. But there may be something distantly related out there.

"...The matter of this chapter may seem kind of mystical, and even if the origin of the idea, which I am going to talk about now, bore some mysticism, technique, science and art gained the upper hand over it in the course of realising of what I call a “sonic microscope”.​
So, what is it all about then?
Some decades ago, soon after understanding, that synthesizers and soundworks don´t deliver promising ways of impressing possible girlfriends, I asked myself, how a certain, a very short part of a sound might, well, might sound.
I realised, that I´d never have a chance to listen to, i.e. some few milliseconds of a sound. A sound might be changing over time – and indeed nearly every “natural” sound does so – I will never be able to learn, how a short certain moment of these changes would be like, would sound in my ears, how a sonic situation frozen in time would rouse my acouesthesia..."


More about this ebook at http://dev.rofilm-media.net 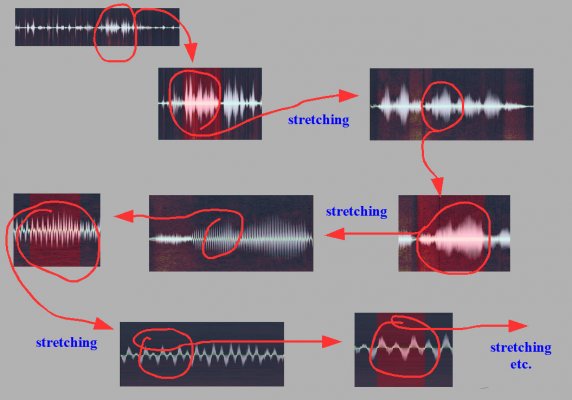 "...I´m going to introduce tools here in this chapter 7. Tools you can start working with at once without having to do some coding at first. I´m not aiming to substitute the manuals of these applications or of these hardware machines. But I´m going to give you far more than just a kind of more or less shallow overview of what they are able to do.

You will be able to decide which of them you need to achieve your “granular goals”, and what´s more, you will know where and how to start learning to use each of them in-depth. You will understand the “philosophy” behind each of these machines, and whether or not it might be a good idea to use some of them at the same time processing the same sound material..." 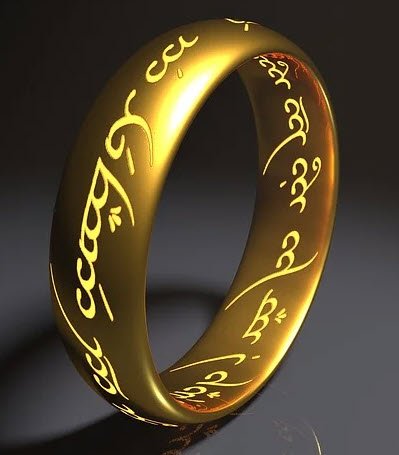 3
creating and running a blog 2021 onwards