During the past months I have purchased quite a lot of Ladik modules for my Eurorack modular system. The beating heart of my system is a combo of several of Ladik's sequencer modules. Let me give you an overview of Ladik's S-180 sequencer line: 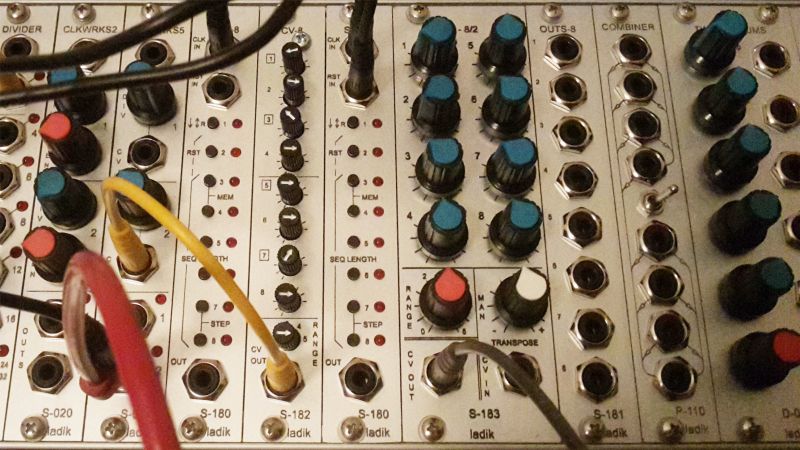 The "mother unit" of all Ladik sequencing modules! The S-180 is an 8-Step Trigger Sequencer with a width of 4HP. It has 8 buttons and 8 LEDs (1 for every step). In order for the S-180 to run you have to feed it with a clock signal (for instance the square wave of an LFO) or triggers or gate signals through its "CLK IN" jack. The steps run from the top (step 1) to bottom (step 8 ) and then start again at the top. Of course there are other sequencing modes (the order in which the steps are running) but I will go into these later. You use the buttons to activate and deactivate the steps by pressing the step buttons for a short time. A fully lit LED indicates that a step is activated (= outputs a trigger signal at that step), while a half-lit LED shows the current step while the sequencer is running.
Simple as that!
You can change the sequence length between 2 and 8 steps on the fly (while the sequence is running) by pressing the corresponding step key for about 1 second. Cycling through the different sequencing modes is easy: Simply press button 1 repeatedly for about 1s and choose the desired mode. Changing the sequencing mode during play can cause short hick-ups but once it has been changed the S-180 continues running as if nothing has happened.

Originally the S-180 had 3 modes of operation (sequencing modes):

I requested 2 more sequencing modes and Ladik was so kind to implement them. These are:

4. Random with non-repeating steps: This means that still all steps are played in random order, but with the refinement that no step is allowed to be played more than once in a row. This makes for some nice options. You can for example use it for a pseudo Sample & Hold effect using the daughter-boards S-182 or S-183.
5. Up/Down (Pendulum) with non-repeating first and last step. A must-have in my opinion!

Now you may wonder what sense does mode 4 make if you use S-180 purely as a trigger sequencer? As you won't hear a difference to mode 3? Yes, mode 4 makes sense in combination with the daughter-modules S-182 and S-183 which add CV values to the S-180, turning it into a proper step sequencer with CV output. I will go into that later.

So, now we have learned that you can alter the sequence length and sequencing modes during operation. What else can we edit on the fly? Depending on how you have set up the S-180 button 2 either sets your sequence length to 2 steps or it sends a manual reset to the S-180, setting it either to the last step of the sequence or instantly to step 1 (this is user-selectable upon turning on the unit).
Next, there is the option of saving your sequencer's current status (including sequencing mode, sequence length and activated / deactivated steps) by pressing buttons 3 and 4 simultaneously. Note that you have to manually save the current status, otherwise the S-180 will restart with default settings or with the last status that you saved.
And last, you can advance the S-180 step by step by holding buttons 7 and 8 together.

Several settings can be customized by pressing a certain button upon power-up. These settings address things like trigger length and reset behavior. You can look up these settings at Ladik's product page for the S-180 (http://ladik.ladik.eu/?page_id=34).

Now let's talk resets. You might think that a sequencer with only 8 steps is a boring affair ("hey, I need 16 or 32 steps!"). Think twice. First of all you have all these nifty sequencing modes that give you quite some variation. But what really makes a sequencer musically interesting is resets. The S-180 has two reset modes: The first mode sends the S-180 to the last step of your sequence when a reset is sensed at the "RST IN" jack so the following clock pulse will set the sequencer back to step 1. This is a good mode if you are using the sequencer in a more "composition-style" environment, for example if you are syncing your modular system to a DAW and want to record a take starting from the first beat in a bar. You simply reset the S-180 either by button press (button 2) or by a trigger or gate signal into its "RST IN" jack, then start your DAW or master sequencer and off you go: S-180 will start on step 1 just as you wanted.
But what if you want to reset your S-180 instantaneously to step 1, say, by sending a trigger signal from another sequencer, a clock divider or a gate signal (for example from your master keyboard via MIDI-CV-Gate converter?).
Then the "reset to last step" mode is not what you want. That is why Ladik has added another reset mode to the S-180's firmware: instantaneous reset. Now you can "play" the S-180's first step by sending it a trigger or gate signal to its "RST IN" jack and the sequencer will always immediately jump to step 1. Now if you take one S-180 and use its trigger output to rhythmically reset another S-180's steps you already have opened up Pandora's Box of possibilites. This way you can get lots of variations from 2 simple 8-step sequencers. I highly recommend getting at least 2 S-180s!
Now it gets even more technical: The S-180 has two modes of implementing resets:
1. "Edge driven": This means that the rising edge of the reset signal sets the S-180 to the last or first step (depending on your setting). So if you send a gate signal to the reset input, only the rising edge makes the difference. The rest of the gate phase will be ignored. This mode is useful if you just want to reset the sequence to step 1 without holding it there for a longer time. Because this is what happens in mode...
2. "Level driven": In this mode the reset is active while the "RST IN" input receives a "high state" by a gate signal, an LFO, a Sample & Hold, a Joystick or whatever module can output CVs. While the reset is active, all clock signals present at S-180's "CLK IN" input are ignored. This mode is great if you want to "freeze" the sequencer on step 1 as long as the reset signal is high.

Summing up, Ladik S-180 is a real powerhouse for a small price and small footprint (only 4HP). Plus it can double as a clock divider, too. Great ease of use, plenty of sequencing modes and great looks!

A very simple module that only works in conjunction with the S-180. It is a daughter-module that is connected to the S-180 or daisy-chained to a S-182 or S-183 with a small ribbon cable. What does it do? It provides 8 individual outputs for the S-180's trigger signals, one output for each step. That means that when step 1 is active on S-180, S-181 daughter module will output a trigger signal on output 1. Likewise for all other steps / outputs. It is in principle what the Doepfer A-161 is to the A-160.
What is it good for? Well, let's suppose you want to trigger an envelope generator on step 1, retrigger an LFO on step 3, reset a clock divider on step 4 and advance another sequencer on step 6: You can do all of the above with the S-181. Simply connect the corresponding S-181 outputs with the destinations on your other modules. This way you can get nice rhythmical interactions with the rest of your modular system.
You can select the length of the trigger signals output from your S-181 by configuring the corresponding settings on your S-180 mother module. Either 1ms triggers or full-length gate signals are available.
One little nitpick: I wish the S-181 had LEDs for each output. Maybe at a later time there will be a revision with LED's? Other than that a simple but useful module at a small price.

Here we have a really nice addition to the S-180 that turns it from a mere trigger sequencer to a CV step sequencer. A small footprint (4HP) CV output extension with small trim pots. The S-182 connects to the S-180 mother module or daisy-chains to another S-182 or S-183 with a small ribbon cable. In contrast to the S-181 the S-182 has its own power connector.
By the way, longer ribbon cables are available on request, just in case you want to position all these pretty daughter-modules further away from each other.
For every step that is active on the S-180 mother module, the S-182 puts out a CV that is set with a small trim pot for each step. In addition to the 8 CV trim pots there is also a range trim pot on the bottom of the module which serves as an attenuator for all 8 CV altogether.
The trim pots on the S-182 are just that: trim pots. Don't expect them to operate as smoothly as a full-fledged potentiometer. For CVing all kinds of modulation destinations the trim pots are accurate enough. In conjunction with a quantizer (Doepfer A-156 or Ladik Q-010) I have gotten good and accurate results pitch-modulating my VCOs. No worries here! Without a quantizer hitting the right pitch might require some patience but once set, the trimmers work accurately.
Again, a very small and useful addition to your S-180 sequencing system!

This is the luxury alternative to the S-182. Slightly wider (8HP instead of 4HP) but with full-size potentiometers with smooth action plus individual LEDs indicating the current step.
Like on the S-182 we get a range pot acting as a main attenuator for all steps. But additionally, further setting itself apart from the more simple S-182 here we also get a transpose knob, offsetting the CV by a manual amount and even externally CV-able via the Transpose input jack! Now we can modulate the CVs that are output by the S-183 externally by another CV. Very cool feature!
The pots used on this module are the same that can be found on other Ladik modules. They are very precise and have a firm action. Well-suited for pitch modulation and all other sorts of CV modulation of course.
I prefer the S-183 over the S-182 but if space is an issue you might want to consider the S-182 instead.

With his S-180 + S-181 + S-182 + S-183 modules, Ladik gives you the very atomic building blocks of a sequencer to customize your own sequencing system. This is modular philosophy to the bone. Hint: There is also the Ladik S-190 Clock Distributor module (http://ladik.ladik.eu/?page_id=437) available which gives you interesting and unusual clocking options if you are using multiple S-180 combos.
Closing words: Build quality is high, prices are affordable. If you are looking for a sequencer for your Eurorack, check out Ladik!
Du musst dich einloggen oder registrieren, um hier zu antworten.