Italian firm Generalmusic have made their reputation in the home keyboard market, but their new Equinox is an extremely well-specified professional workstation.

“
Generalmusic have opted for the tried and trusted method of Sample And Synthesis (S&S). A single patch — called a Sound — takes its source from the onboard waveforms (or from imported samples, which we'll discuss later) and processes them through a digital filter section with multi‑stage envelopes (up to 10 stages with a loopable section if needed) controlling pitch, filter and output contours, with a Low Frequency Oscillator for modulation. Waveforms may play forwards, backwards or in one of two 'alternate' loops, the usefulness of which varies according to the waveform chosen. For some it alters the timbre drastically, for others it introduces subtle or not‑so‑subtle glitches.

As in most S&S instruments, the main timbral modifier is the resonant filter, which can operate as low‑pass, band‑pass, high‑pass, parametric cut or parametric boost. If you don't want to get deep into programming, the eight sliders offer a quick way to edit envelope level, attack, decay and release, along with filter cutoff and resonance and vibrato level and rate. All changes made with these sliders can be stored into user patches (unlike those made using the sliders on my Roland XP80!). A sound consists of up to three separate layers, each being made up from one or two waveforms and having its own key and velocity ranges. Five algorithms determine how the waveforms are routed internally, ranging from Single (one waveform passes through filter, envelopes and output stage) to four Dual configurations (two waveforms, either passing through their own filter and envelope routings or sharing them). Thus, with all layers active, a patch can have up to six oscillators in total, although this obviously reduces polyphony.

This is a very straightforward but flexible design — you can do the kind of deep, layered stuff in a single patch that many synths reserve for their multitimbral modes. In practice, I started to find the small screen less than ideal, because of the amount of scrolling that was necessary. Some form of jump function to quickly reach the bottom or top of a parameter list would improve things considerably.

Every patch has parameters common to all its layers: velocity curves, random pitch amount and a portamento (the ability to slide smoothly in pitch between notes, as a violin or fretless bass can) which is particularly well implemented. Interestingly, keyboard input is used to name patches, and I suspect having the printed manual throughout the review would have helped. Most of my creations ended up being called 'NNNF' or 'GGRZ,H' because I consistently failed to remember the key‑to‑letter associations!“ 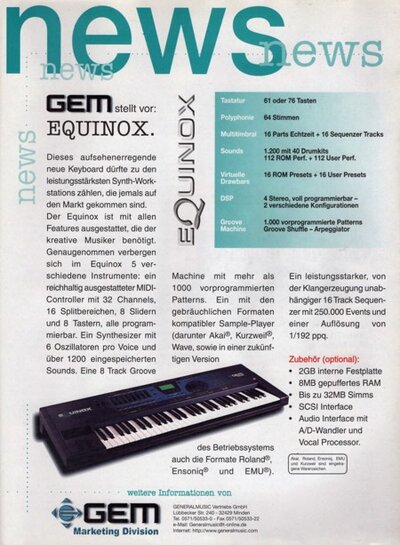