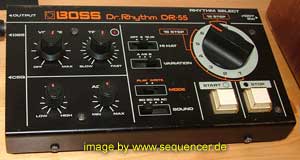 The Jp4 was his second synth, the DR55 his first, you hear them on the first Album of Depeche Modes Speak & Spell and Yazoo 8both), the DR55 was used live.. btw – he does NOT show the Jupiter 4s very fast LFO, which is one of the two big cool features of the Jupiter4, the other one is the fast and snappy envelopes! don’t buy one, it’s awfully geavy, ugly etc. but I love it, too – you can hear some sounds on my recent releases btw.