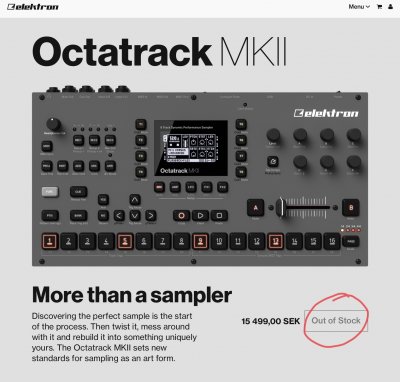 
Added the functionality to preview a single sequencer step (including its parameter locks) by pressing [TRIG] + [YES] in GRID RECORDING and STEP RECORDING modes.


Added a new parameter that makes it possible to set trig probability for all the trigs on a track.


[MKII] Added the possibility to reload all the parameters on the FX track's PARAMETER pages to their last saved state by pressing [FX] + [NO].


Added the possibility to select/purge unused Sounds and samples from a project.


When adding a retrig, the first up/down-arrow press now only engages the retrig on/off (and does not change RATE) on the first press.


Added snap values for the LEN parameter on the TRIG page.


The selected tempo mode (PATTERN or GLOBAL) is now shown in the TEMPO screen.


The default tempo mode is now set to PATTERN.


Restructured the GLOBAL SETTINGS menu for better clarity and to harmonize the content across the Elektron product line.


Added the functionality that the tracks set to SEND MIDI now also forwards the incoming data from external MIDI controllers to the MIDI OUT port for control of an external device.


[MKII] The color of the [TRIG] keys now indicate which step functionality is being edited. E.g in Accent view, all trigs with accent are lit pink. The colors are Green/Pink/Yellow/Blue for Trig Mute/Accent/Swing/Slide.


[MKII] The color of the [TEMPO] key now indicate whether project or pattern tempo is used by blinking blue or green.


Added snap values for the LENGTH parameter when pressing [FUNC] + [UP]/[DOWN] in the SCALE menu.


Improved the visual feedback from the [REC] key in LIVE RECORDING mode. The [REC] key now blinks per beat independent of the sequencer position.

When performing a page reload on the SYNTH/SRC PARAMETER page, all non-machine specific parameters on all PARAMETER pages reloaded to their default values.


[MKII] When using [FUNC] + [YES] to preview a recorded sample in the SAMPLING menu, the preview was incorrectly affected by the LFO.


[MKII] Scale menu LEN and CHNG values increased instead of decreased when turning the encoder counter-clockwise while holding [FUNC].


Pressing [TRIG 13] switched the FX track to be the active track when AUTO TRACK SWITCH was enabled.


In some cases, active scenes were not activated properly again when switching back from another pattern to the pattern that contained the active scene.


Activating a scene could cause a Kit to reload and subsequently that the ongoing parameter locks and parameter slides were reset.


Micro timing did not work properly on tracks that had a non-x1 SCALE setting when using LIVE RECORDING mode.


Parameter locked values were not displayed if another key was pressed immediately after the held [TRIG] key.


Some parameters were too sensitive when snapping to values using the [FUNC] key.


A fixed (non-synced) BPM MULT setting on one LFO could, in some circumstances, affect the tempo of other LFOs.


Aftertouch modulation cut off Pitch bend modulation when an external MIDI controller was used to interact with Overbridge over USB MIDI.


When in LIVE RECORDING mode, and using an external velocity-sensitive keyboard, only the first played note's velocity in a chord or when playing legato was recorded. The following notes instead got the default velocity parameter value.
Zum Vergrößern anklicken....