The Roland JX-3P was released in the year 1983 as a 2-DCO 6-voice polyphonic analog synthesizer. It has 1 LFO, 1 ADSR envelope, cross-modulation and oscillator sync capability as well as an analog stereo chorus effect. Additionally to its MIDI interface (actually one of the earliest synthesizers to sport a MIDI port) it has an inbuilt step sequencer. I have read on several occasions that the JX-3P was designed by Roland's guitar department. That's a really strange move and seems to be unparalleled in Roland's later years. 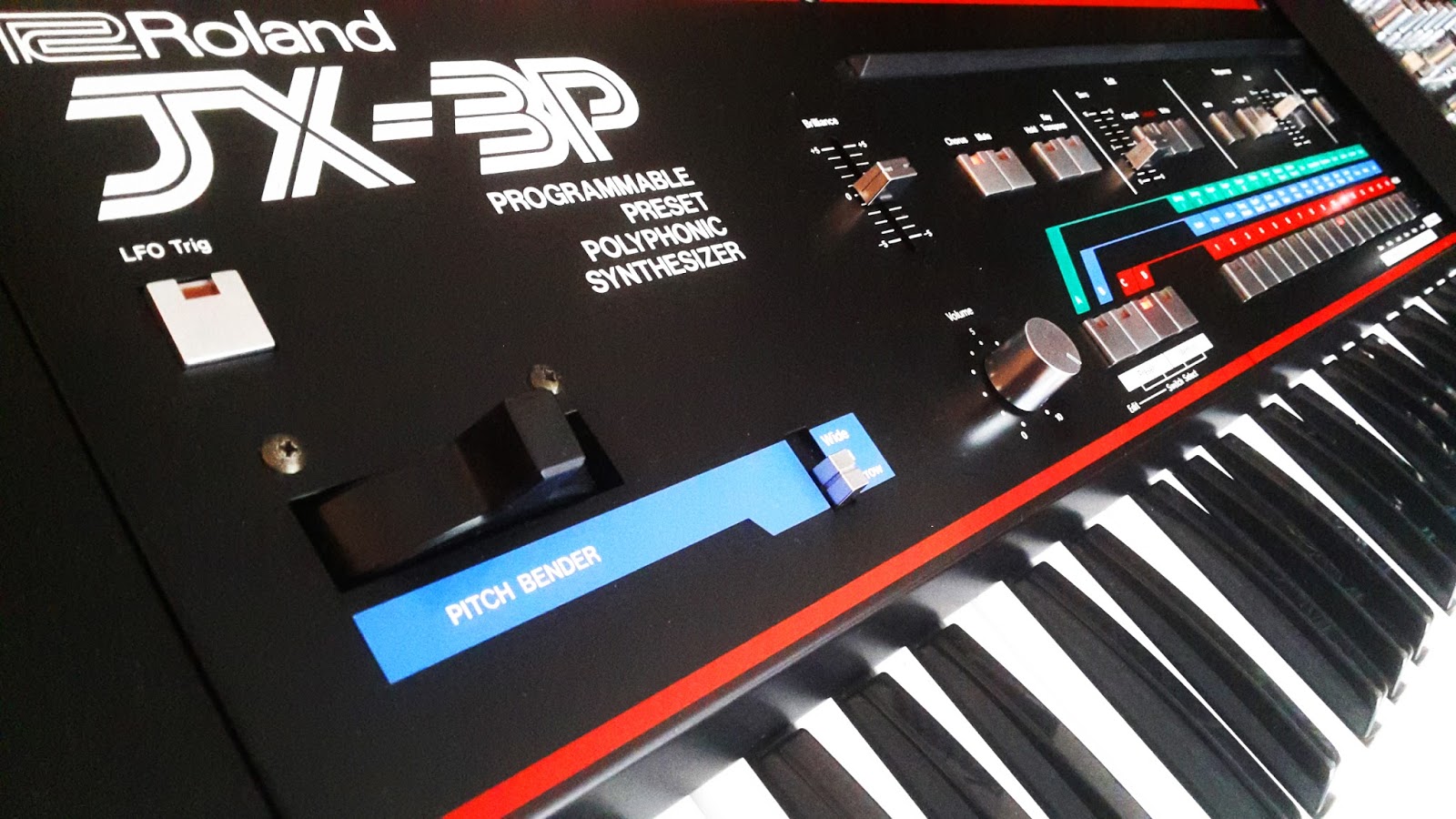 The JX-3P was the first Roland synth to cut corners in terms of "knobbiness" in the user interface. That is to say that if you look at some other analog synths that came out before 1983 (Juno-6 / 60, Jupiter 8, the SH Series) they were full of knobs and sliders, giving the user hands-on editing and tweaking capabilities. The stock JX-3P only has a couple of sliders and pots for editing, brilliance, sequencer speed and master volume. The Yamaha DX-7 really took its toll with its futuristic slider-less design. From 1983 on, a synthesizer was considered modern when it had a "digital interface", meaning buttons instead of knobs, ideally with an alpha-numerical display, that was the pinnacle of futurism. Instead of simply grabbing the knob of the parameter you want to change you would now have to select your parameter and then dial in your desired value with incremental +/- buttons, alpha dial or whatever "user-friendly" interface was designed for your "modern" synth. This push toward digital interfacing really took away a lot of fun from the synths that were designed from 1983/1984 on. 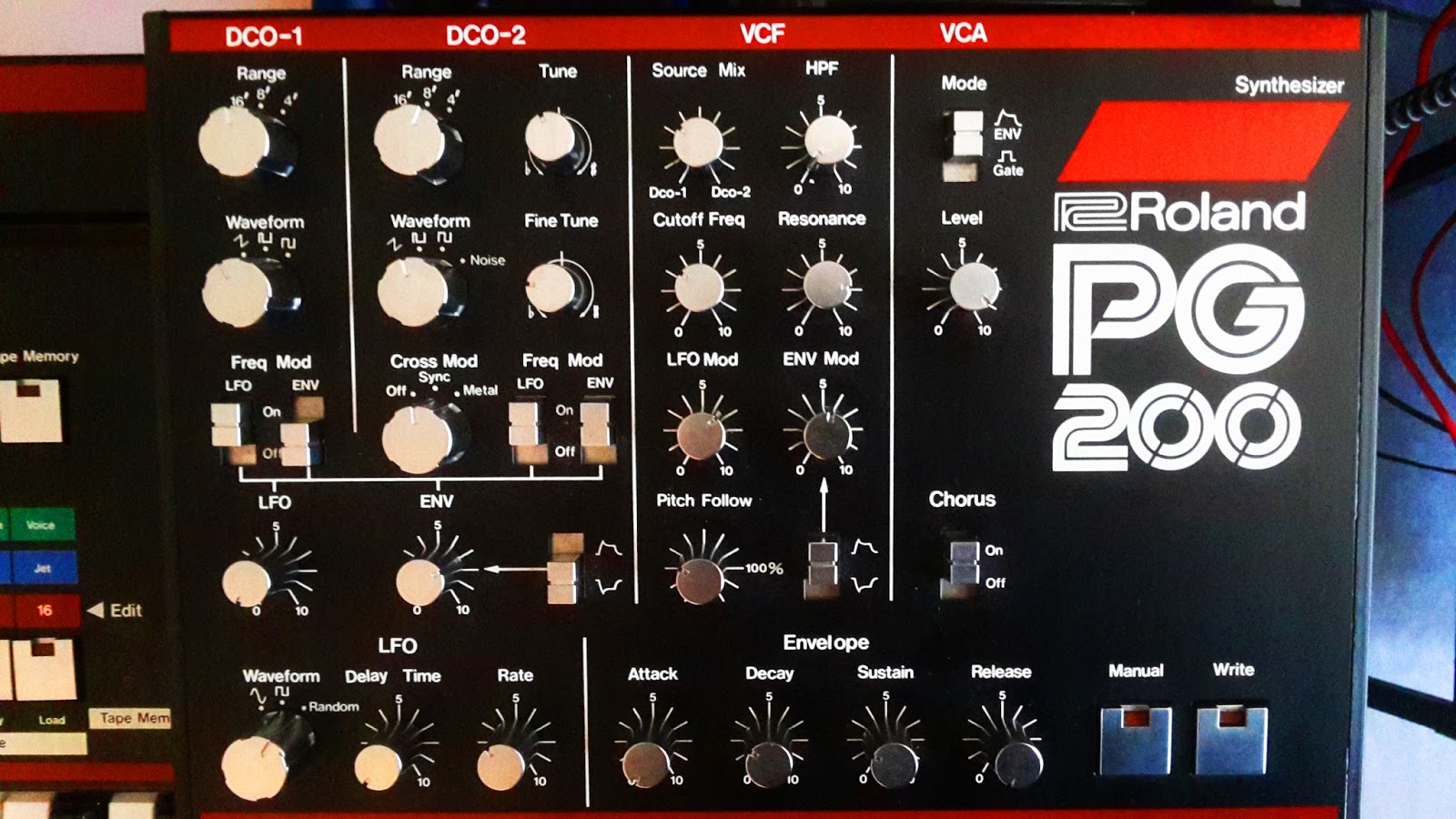 At least Roland came up with a way of giving the user a "knobby" interface for the JX-3P: The PG-200 programmer. This little helper neatly sticks to a spot specifically reserved for it on top of your JX-3P with the help of magnetic adhesive strips. It connects to your JX-3P using a 6-prong DIN cable. The PG-200 gives you direct access to all parameters of the JX-3P right at your fingertips. Roland continued this trend of detachable programmers for synths like the Alpha Juno 1 and 2, JX-8P, JX-10 and their counterparts in the MKS range. The PG-200 really opens up your JX-3P, it really is strongly recommended. It feels sturdy and durable enough, matches the JX-3P`s design and is a worthwile investment. There's one catch though: You cannot use MIDI and the PG-200 at the same time. There's a switch on the back of the JX-3P that selects either MIDI or PG-200, not both unfortunately. So, sequencing your JX-3P via MIDI and tweaking away on your PG-200 at the same time is not an option. There is a solution for those who don't mind modding their JX-3P. One is the Organix MIDI mod, the other one the KIWI 3P upgrade. Both modifications allow simultaneous use of MIDI and the PG-200, along with loads of other improvements.
Speaking of MIDI, the JX-3P's MIDI implementation is very rudimentary. There's not much more going on than note on/off, pitch bend and program change. But hey, MIDI is there, making the JX-3P very easy to integrate into a modern setup.
The JX-3P has 32 preset sounds and 32 user-programmable ones. You might expect the usual 80s preset cheesiness but to be honest, I find some of these presets very usable. At least they're a good starting point for creating your own timbres.
Since my JX-3P came with a PG-200 I have no idea how cumbersome it is to program your sounds with the JX-3P's interface in the long run, but it looks pretty straight-forward to me. At any rate the JX-3P is much easier to use than some later Roland synths that have unnecessarily convoluted operating systems.

So how does the JX-3P sound? Well, if you have read this far you will already have listened to some of the great demos available on Youtube (Retrosound, Analog Audio and WC Olo Garb / Jexus come to mind). To me, the JX-3P is a connecting link between Roland's 70s and early 80s vintage and mid-late 80s sound. It can sound warm and fuzzy if you like it, but it really excels at making those bright 80s sounds that you can expect from a polyphonic DCO synthesizer. To me it sounds more modern than, say, a Juno-60 or Polysix. There seems to be an old debate going on which is better, the Juno-60 or the JX-3P. I would say, if you can afford both, get both! They compliment each other perfectly. If I could have only one, I would most likely take the Juno-60. The JX-3P's 2 DCOs give you a lot of options to combine, tune and detune your two oscillators to create some nice timbres. The lowpass filter (a Roland IR3109 chip) sounds classy and brillant. The ADSR envelope is snappy enough for your everyday needs but it lacks the clickiness of some more expensive synths. The LFO has a reasonable range as well as some different waveforms but it's pretty standard. One word about the LFO delay parameter. It has no effect when sequenced via MIDI, nor does it work when using the internal step sequencer. It only works if you hand-play the JX-3P usings its own keyboard. 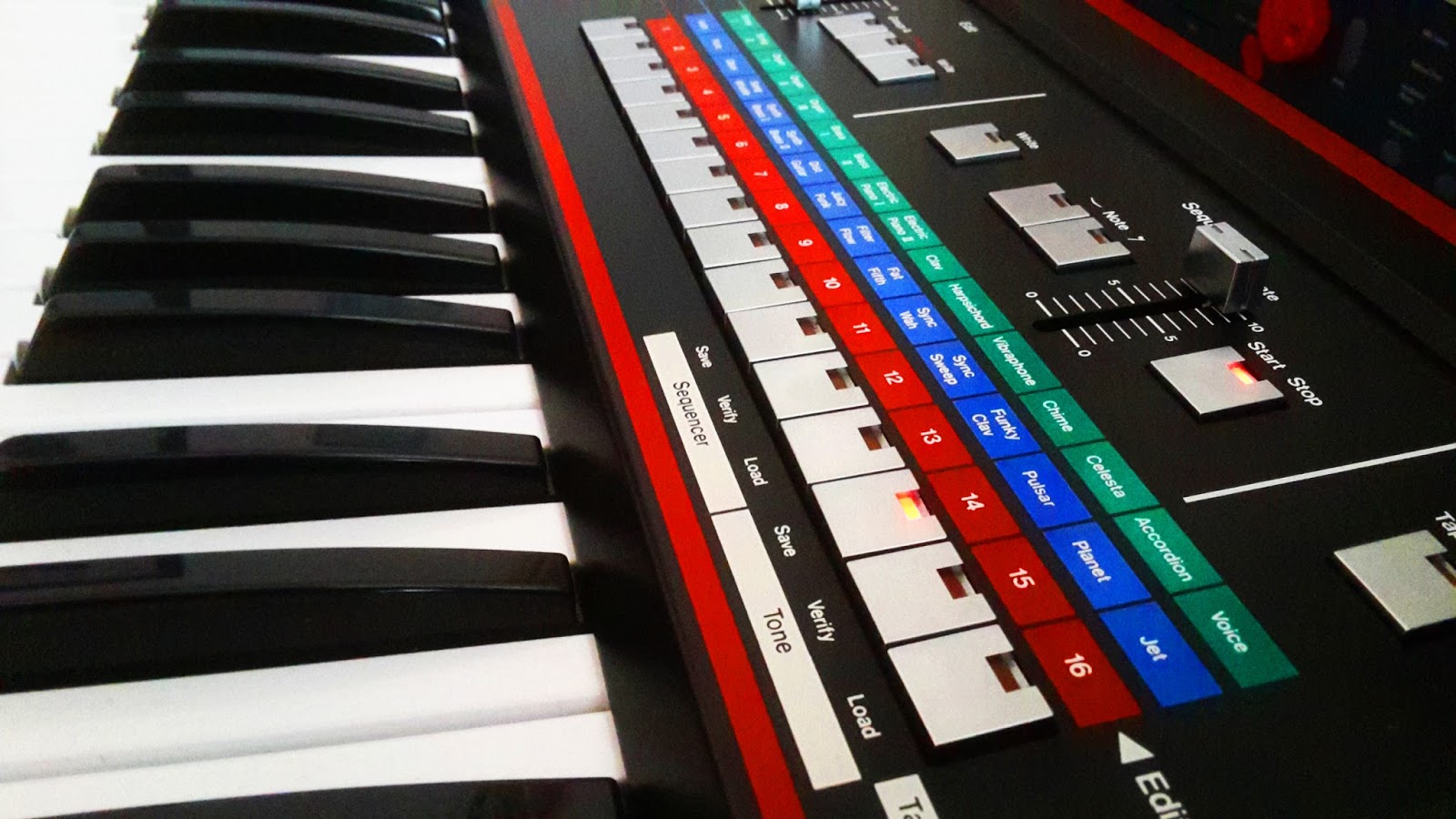 The JX-3P's controls: buttons instead of knobs

Let me elaborate a little on the JX-3P's sequencer. It can store up to 128 steps with 1-6 notes, rest or tie per step. That's an awesome feature. You might think "well, I can do all of this with MIDI using my DAW, right?". Sure, but it's not as badass as using the JX-3P's onboard sequencer. It's so easy to operate, making it a great tool to quickly come up with a sequence or capure a musical idea, and it's polyphonic! It's also really useful for jamming. And if you try to avoid using your DAW for MIDI as much as possible (as I do), using a synthesizer's own arpeggiator or sequencer is always welcome. And timing-wise it's rock solid and stable. Ah yes, I forgot to mention the fact that the JX-3P's sequencer can't be synced to incoming MIDI clock. It wants analog clock pulses or triggers. Audio signals might work as a trigger source, but it is highly recommended that you use proper analog trigger pulses from a MIDI to CV/Gate interface, modular synth, clock generator or drummachine (for instance using the trigger outputs on your Roland TR-606/707/808).
If you clock your JX-3P's sequencer with a signal that is not periodical or steady but rhythmically changing, you can end up with nice ever-changing sequences that can be very inspiring.

Wrapping it up, the JX-3P is a real workhorse! If you are into 80s inspired music (Synthwave, Italo, Synth Pop, Soundtrack) or 90s Techno and Electronica, the JX-3P is still a very viable and usable synth. It sounds classy and has a presence that makes it stand out in a mix.

Let me share a youtube clip with you that I made earlier this year. It features the JX-3P for all synth sounds and a Linndrum for the, you guess it, drums! I multitracked my JX-3P parts using its internal sequencer and by hand-playing on its keyboard. Some external effects were used to spice up the track. Enjoy!