WALDORF… silly and old Ideas
more silly thoughts on a Wave II or whatever.. and my fave idea (an all purpose 64 Knob boards with diplays for every knob (a 16×2 would be enough for showing parameter names of 6 knobs).. here is some more:

first some movies of the WALDORF WAVE film1 film2 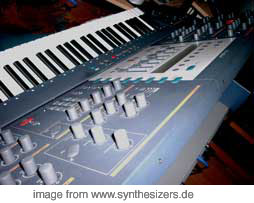 basically the waldorf wave is a microwave 1 with lots of extensions, much more voices and more software ;) : 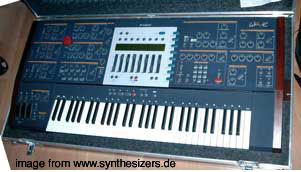 2 Oscillatorss that are „hybridly“ filtered by real analogue filters (whats inside see the CHIPs section).the filter is a 24dB/oct LPF filter with resonance and a 12dB/oct HPF witout resonance.
the wave has the same structure as the microwave 1 but also has some specials like the additional filters, the perfect knob panel and modable „aux“ returns.(to go through the filters and pan section, but there is no env follower)

the curtis (filter) chips are rare, so waldorf discontinued the wave. a voice board was worth 2000€ new. 16 voices per expansion. the standard wave has 16 voices, max is 48 voices. but: 8 multis max!

buuut: it really sounds more like a „wall“, compared to the microwave, much broader and wider..

it still has one wavetable for both OSCs and can be set independently.
note: like the mw1 it has no sync or fm and the old 3 bit mixer section (7 is max level).

the internal software is able to analyze sound designer files (there is not much software ,that still can handle this format). like sounddiver does for the XT and mw2/mw1 with WAV files it is able to resynthesize up to 60 waves for a wavetable to form a „resynthesis-like“ collection of static spectra. now do ,what the wave is made for: scan through the waves using the envelope. you hear some sort of lofi re-assembly of those spectra that form the sound. of course this does not work for all kinds of sounds: noisy or phasing sounds will not give you good results, but some do as a good basis for new sounds and re-construction of spectra.

also you’ll find FM and other wavegenerating methods in the wave software that are quite close to SD’s adaption for the microwave series 1,2,XT and XTk. about anaylsis

we HAD such a thread some moons ago..
I posted a lot of wishes that could be on the Wave2 then..

3 or more OSCs that have independent Wavetables, all FM able (Q like, yes..)
very fast LFOs maybe there are no LFOS but 3 more OSCs that tange from very low
to very high.. (our mini-discussion)

these Wavetables have many more Waves and full cycle.. and samples can be
integrated into.. higher resolution and: of course downsizeable to the
current Wavetables sound..

you should do all the analysis with samples on board and the quality could
be that high that you can do re-synthesis stuff..

so.. maybe it is a deluxe sampler that cuts the samples into algorithms and
sand saves its spectra then.. what use?? you can do morphing with this, very
strange modulations and very xpensive sounding new soundscapes..

the sampler sections has knobs,too .. it is a very diffent kind of sampler..
and you can tweak the samples (I wonder why there is no real „analog“/VA
interface sampler..)

well… but maybe i should mention my coolest wish.. it should be modular..
why not?? the UI would have to be flexible and some displays are needed to
show what you are editting.. in the middle there is a big display for those
Waves & modular stuff.. (please have a look at the other modulars, first!!
NordMod & Pulsar.. – just to avoid their „mistakes“..)

I already told my visions on the ui:
there are 2 basic ideas:
modular UI / hybrid ui:
6 knobs sharing one display completely free..
and some dedicated sections for saving displays that are needed anyway:
ADSR (or whatever…)
more cool: having 64 knopbs and a shift button (get 127 real knobs then..)
I know the need of 11 „16×2“-type displays then for the parameter names for
the top of luxury interface (ibk control – like)

FX: all modable & CC able, reverb, delay, those already xisting Q&XT FX..
per voice FX.. (FDSP like..?) having fx for every voice is really cool and
theiy are part of the sound.. not only the mix..

ok.. this is the first re-load of my idea stack..
I got more on my site and posted some more before..

and I still believe in the free UI – idea.. not a dedicated panel for every
new machine.. (sorry Philip)..

the wave 2 is a very special machine.. so its use a a knob box (free
assignable CCs for cc’ing others) would be a nice addition (XT,Q could have
it ,too) including a knob local off..

if such a on-top synth would have a on-top sequencer on board (logic-like)
would make me work on it only.. (of course I’d like it to have those Q & XT
goodies like drummaps..)

now -back on my flying carpet-
that sounds like an awfully xpensive machine..
well I’d think it would be ok if it is a pretty xpensive machine then..
and it should make the Q & XT „obsolete“ (we all have to sell our cool stuff
away to get one.. ne.way :-)

there are a few more concepts to talk..
maybe it could be less xpensive.. then the old wave…

but my demands seems as high as they will need to do special magic(k) to
even develop such a nice machine at a nice price..

and I havent talked the details yet (big resolution windows for important
parameters like cutoff, reso etc.. for using 2 CCs or more (internally it
should do so anyway) for not getting the 113 – 114 cutoff problem (that
seems to be the range where I want more numbers/resolution..)
some WAVe typical things: upper wavetables!, hmt – so called hermode tuning.. sets every played chord into a clear temperament so it is never detuned as our „well tempered“ scaling dictates.. (sorry Mr. Bach.. I still ove your music)
ok.. quite a lot for a start isn’t it?
my -whatever- just 2 pieces of space money sized 3km per side.. (wanna see
the porte-monnaie??)
to be continued…

just to be „complete I add Philip Pilgrims suggestion here.. yes.. it reads well.. and as always.. more isn’t bad :-) :

and many nice random generators (noises & chaos & controlled chaos..)
I loved those chaos „somewhere between 20 and 35“ generators..
and those cool waveforms for the LFOs..

of course real noise (and a knob from white to colored..),too..

what about a filterbank.. modulatable..??

I also love the idea of controling each pole seperately (yes.. I have heard
& seen the sunsyn).. and have a morph for it..

what? DAHDHSR.. no the d can be skipped.. Id prefer a free Wave-type ENv. as
in the XT.. I never needed the delay at the beginning (ok.. seldomly)