I'd like to offer everyone a chance to take an early look at, and, more importantly, listen to, Strobe v2.0.

We've been working on this for quite some time, and there's still a little way to go, but we think it's ready enough that it's time to get some feedback from a wider audience.

So what are the big changes?

- Glitch-free, 100% vector scalable UI, available in (at least) two flavours. Currently we have a dark look for people who like to work in the dark (roughly equivalent to the Logic Pro X or Bitwig stock colour schemes) and a bright one for people working in a more daylit environment. It will scale to suit any screen size / pixel density / resolution with no bitmap artifacting (because it's no longer based on bitmaps.

- Integrated effects, including some brand new algorithms as well as some thing that owners of Etch, Bloom and Maul may recognise, with full TransMod capability on (almost) everything.

- Instant patch switching between 8 active sounds. This is really useful for both keyboard players (extremely fast switching mid-way through a song, mappable to program change or a.n.other MIDI message) and for electronic / EDM people producing complex basses, leads etc. where you want to be able to switch the aspects of a sound, instantly and glitch-free, midway through a sequence or even per-note. It gives you some of the capabilities you'd get from Rounds or Symptohm:Melohman (though we were working on it long before that announcement, I should point out) but on a modern VA subtractive synth.

- Huge CPU optimizations. Synth Squad 2 runs at 2x oversampled and above, only. The audio engine has been completely rebuilt to take full advantage of AVX (on all CPUs since "Sandy Bridge") & next year's AVX-3.2 instruction sets where available. It runs 30-40% more efficiently if you have an AVX capable CPU - I can comfortably play 32 voices at 8x oversampled (352.8KHz) in realtime on a Sandy Bridge machine, requiring as little as a third of one core to do so. (although the merits of going beyond 4x oversampling are questionable). Next year's "Skylake" CPUs (AVX 3.2) will give it a further performance boost.

- Rebuilt arpeggiator, stepsequencer and modulation processor. Effectively this is the Fusor arpeggiator but rendered comprehensible to mortals. Dedicated fixed-function units replace the sometimes hard-to-understand, Eurorack-inspired powerhouse that is the Fusor arp. Plus it gets the same TransMod sources as the rest of the synth, some dedicated modulation processor units, and the ability to keep your arp/sequence in memory while changing presets.

- Ability to unlink the Sub from the Stack/Detune/Sync parameters. This small change makes Strobe's oscillator section massively more powerful, use the sub to create stable bass alongside sweepy stacked harmonics from the main osc, or to underpin a cutting Sync tone with a nice solid low-end foundation. The Sub also gets an extra octave of range, and a modeled drive stage to help make growly monster basses.

- Phase reset on the main oscillator. The single most requested feature!

- Frequency-linked tone controls on each oscillator section. Really useful single-knob control for altering the character of the sound without changing what the VCF is doing. You can use them as a high-cut or low-cut to change how the oscillator sections interact with one another and the filter. Have a sound whose personality is pure VCF, but gets brighter and darker (via velocity, modulation, whatever) without changing the VCF character.

- Gain compensation and leakage control on the filter. We looked at adding different filters (we have an arsenal of great filters to choose from) and decided against, because we feel that the VCF is such an important part of the synth's personality. So we fine tuned the existing model with a gain compensator on the drive stage, and a leakage control because it sounds lovely.

- Adjusted envelope and fader ranges, much better consistency in the internal smoothing algorithms, choice of detuning modes, dozens of other little refinements. Strobe 2 will be available individually, ahead of v2 of Amber / Cypher / Fusor, from FXpansion and selected dealers. We'll of course ensure that existing Synth Squad owners get the best deal, and that people who buy the synths individually before the release of any bundle pay no more to complete the set than a new customer would.

The other synths are being updated to the new engine as well, of course - all three will share the most of the above, with Amber in particular getting some improvements to its audio engine - improved CPU efficiency means we're able to model some elements that got left out in the original (particularly glad we've been able to get Logan-style "diode VCA"s in there - they're absolute junk in fidelity terms but sound amazing). More on that later. 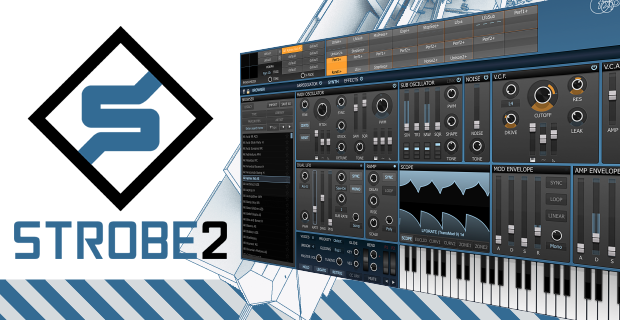 All the following products are available at 50% off:

BFD3 Upgrade: BFD3 is the third generation of our premium acoustic drum software. With stunning new kits, a fully revamped interface and unique modelling technology for cymbal swells and tom resonance, embrace this opportunity to upgrade your BFD2 or BFD Eco instrument.

These offers are valid from 20 March until 30 April 2017 from fxpansion.com and participating retailers.
Zum Vergrößern anklicken....

These offers are valid from 20 March until 30 April 2017 from fxpansion.com and participating retailers.
Zum Vergrößern anklicken....