DX1 pic by theo bloderer @ bluesynths.com
the biggest dx ever: incl a special algorithm display!....here’s a nice dx1 link… was very very expensive but had lots of displays and 76key keyboard. the reast qas identical to the

that means: you got 6 Oscillators with Sine Waves ,
frequency modulation fm synth – how FM works?
please check the synth? menu

the most exiting thing maybe the enormous dynamics, because every OP envelope (OP = operator = oscillator) could be set individually to respond to velocity. yes: every OP has a dedicated output level and ratio and multi-stage envelope.

the speciality with yamaha is: you need to think different: the rates are „angles“,so 99 is the fastest possible rate! (don’t confuse this!)..

the dx or fm synthesis is well known for bell and rhodes sounds, but it can do much more than that!! or fm basses got popular in the 90ies ;) but autechre and other new electro bands showed there is another use of fm synthesis sounds!!

the first generation DX had 12bit DA converters, so you had aliasing and „hard“ sounding sonic „response“.
there were very strange models like the ys100 and ys200 (almost preset/simplified FM synthesizers), the 4OP workstation V50 and 6OP and 4OP synthesizers: 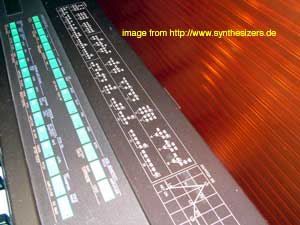 2nd generation (better DA on some models, still the most wanted generation for its „vitality“ of sound):

<–FB01 (thx joerg for pic)
very cheap 4OP synth with 8xmultitimbral synth. you can change everything as long as you use a software editor. but: well, for FM you should consider editor software anyway. the 4OP and 6OP Range also took place in Yamahas „keyboard“ range and some „exotic“ keyboards (cheap to mid price range). even sound cards.. 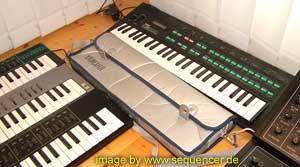 a special machine is the MSX Computer CS5m, which is almost the same like the FB-01 or a downsized TX81z (little drawbacks..) but it is perfect for lofi and 8bit lovers ,because you can access the AY8910 , the internal 4 OP synth is not as easy to access via MSX (maybe for compatibelity reasons) so you have to use the additional editor and composer card or try to find the right pokes and peeks..) 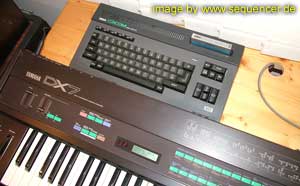 click CX5M to enlarge..
there is a FM voicing card in the slot, you need the editor to change the sounds.. otherwise you need to program it yourself (if you know where to poke to?) ;) 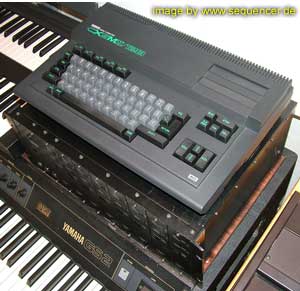 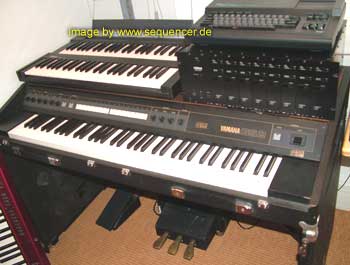 btw it stands on a GS2 2OP first FM Synth and the big full expanded TX816 with TF1 modules (each one is a DX7!)<— the GS2 looks like this
with the TX-816 on top –
the keyboards on the left are also used for the CX5M Computers..

dx200, plugin concept: works on most yamaha workstation called plg100dx (beside modules for physical modeling aka vl70m, piano and VA (called AN) etc.. well ,the dx-200 is almost soundwise the „2nd generation“..
the DX7 got updated for its old style 12bit D/A converters. so the DX7II and DX7IIFD (and dx7s) were born 1987 (read about disk format of it under „digital“ or tricks). there was a rack version also: the TX802. the 2nd generation DX7II had unisono mode!! find the DX7II as a rack „TX802“ . find unisono in TX816/216,TX802, DX7II series and layer-type sounds on the FS1R,tg/sy models. the DX-21 and DX11/tx81z have performance and/or unison modes ,too! which is very interesting!! sounds fat!

<– TX802 (thx for pic top summa)
btw: there have been a lot of expansions for the DX7 (more memory etc.. like e! etc..)
today you can get a „hardware plugin board“ PLG-DX that is in fact a complete DX-7 for CS6X, Motif series etc..
the dx200 is also based on the DX7 PLG board. its a DX7 with knobs like some sort of macro „easy page“-control.. you can edit the DX7 with software but in a live situation you still have those knobs like „harmonics“ to change the OP frequencies at one knob tweak.. so it is a comprimise,but not a bad one.. there is only one much better solution: the programmer: 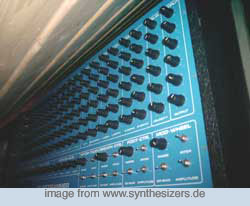 luxury programmer and the most known yamaha fm synthesizer: DX7, 25 were made by the company from dortmund/germany JELLINGHAUS – controls DX7,TX7 or TF modules of a TX816 module rack as well..
the latest DX7 – based synth is the strongly expanded yamaha FS1R, has 8 OPs and another 8 „unvoiced“ OPs with BPF filters and lots more plus formant sequencing.
Yamaha DX-7II Centennial: there was a special version in 1988 with 76 keys, 32voices, means 2 DX7IIs in one case.. rare of course like the silver version of the DX7.

FS1R pic thanks to plasmatron
another on by myself..

there is another very rare 8OP „vintage“ synthesizer from 1988 called yamaha FVX1
it’s high price may have shocked the ppl and helped not to sell it much, had also FX on board.
but before the FS1R, yamaha had the big SY and TG series:

YAMAHA SY77 and TG77 that had samples on board and the first FM synthesiizers form yamaha with filters (well you do not necessarly need them in an fm synth) 2 filters to be exact. also extra env for pan and samples that could be included in the FM signal path (As an operator), had 3 feddback lines instead of 1, the FS1R also has only 1 feedback line. also the TG77 , SY77 and SY99 all had a free assignable algorithm. the SY99 had some ram slots to use OWN samples with!!.. 4 slots, 512MB each. available. thats the main difference and the 2 spx900 FX processors. the TG77 had ind. outs. the SY77 and TG77 had a smaller fx unit, but also 2×2 FX sections as the SY99 but no sample ram. also the tg and sy synths could route the pitch env individually to the OPs unlike all other yamaha fm synthesizers.

the latest one is the DX7 as a „plugin hardware“ that can be attached to some newer yamaha keyboards and the dx200 groovebox, that has a DX7 and a 16step sequencer in it.. (german: deutscher test hier zu lesen!)

of course there are also software plugins – but not from yamaha. native instruments made the fm7 and loftsoft has the fmheaven. both got a free algo-matrix and fm7 has 128 step envelopes that even sound „wavetable’ish“ if intensitively used.. ;)

6th Gen – Reface DX
this one is even more punchy – but with 4OPs only – maybe a start for more? Feedback is different (shapes the waveforms instead of making it noisier like white noise) but 8step envelopes.. 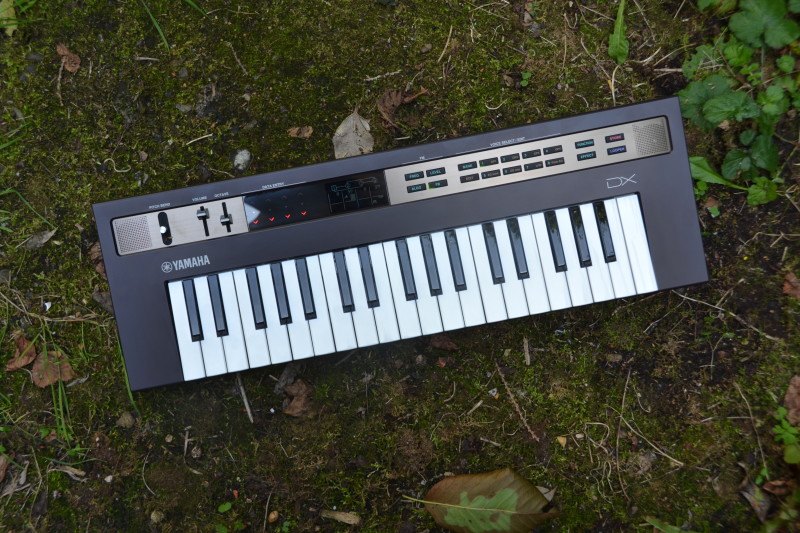 ONE GENERAL WARNING
: most yamaha FM synthesizer KEYBOARDS do have a range from 0 to 120 for velocity! thats,why some people get shocked when they realize: oh, I can not go beyond 120 (121-127 = maximum velocity). so I recommend the racked versions exept if you do not want to use the keyboards for other synthesizers than the internal one!!
the old dx, the newer one (DX7II), SY77.. etc.. they are all limited here.. anyway the SY99 is still the top model for 6OP FM with rom AND ram samples.. the FS1R sounds a bit „nicer“ .. and it’s response is somewhat „slower“.. we are talking about „freak infos“ here..

the typical relationship to control the OPs (OSCs) amplitude – 6 ENVs of a TG77: 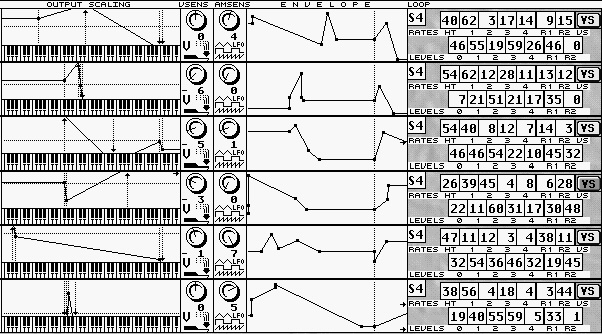 an FM algo of a 6 OP synth.. software like the fm7 allows feedbacks as many as you like, in the TG77/SY99 you can have up to 3 of them. the feedback will generate „noise“-like effect.. but you can create very noise like sounds by using a hi-frequency OP at max level.. this one is the TG77’s algorithm – btw: pm/pd phase modulation is often the same result than the fm systems. you know, yamha holds the patents, only pd systems can have feedback ,so yamaha themselves used also „PD/PM“.. 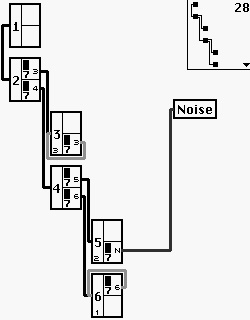 more on fm in deutsch/german: