PPG Wavegenerator. is a new App by Wolfgang Palm, the creator of the PPG Synthesizers and father of the wavetable synthesis as well as this new speech synth (just search this site for Wolfgang Palm)…
he just opened a Facebook Info Page and it might appear on the App Store somewhere soon (+/- 1 month from now).

UPDATE: features – it is 256 Waves! So this is beyond MIDI resolution:
will produce about 8 voices on iPad 3, iPad 2 may be a bit less.
· Creation of your own waves and wavetables.

· Playful sound creation simply by drawing or picking harmonics
· Dynamic / Velocity sensitive simulated keys on the iPad itself!! also the position of the finger can control things!

· 3D page, visualization of the wavetables, transformation from photos into wavetables.

· 256 waves assembled within a wave grid

· 3 Noise generators, for audio and modulations

· Dual amplifier, for versatile control of 2 audio signals as well as panning.

· 13 Envelopes, for independent control of pitch, waveform, filter and noise gain and panning

· Use a camera, to shoot a picture and then transform it into a sound!
· Using state of the art technologies, but still the versatile and efficient synthesis system.
· Build your own keyboard, with the keys you prefer for your music.
its a full synth and of course it has waves ;) – there’s not much more about it on the web so far, but you might expect a PPG Wave Emulation, it is a bit of that plus Arpeggiator and other features you might not want to miss. But hang on, until all is public.looks very much like I want it since it has all the wavetable stuff in it and it uses todays tech, it is so easy to create additive waves on the iPad, so I wonder why noone did it before, … 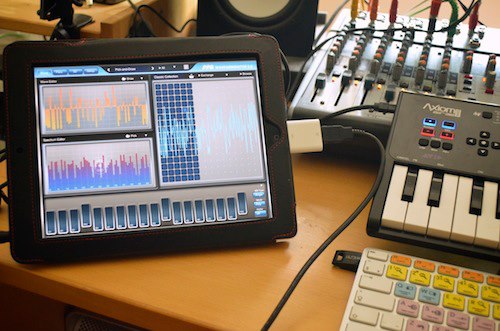 Yes it’s true; from the Father of the PPG Wave comes the future of synthesis on the iPad… coming soon are going to be sound samples, pictures and more info from the man himself. Like this page to find out more about this exciting new iPad App – it really sounds like nothing else you have ever heard.

and this image showing the app:

does it ring a bell for you if you think of somthing with „Wave“ in it that has a disc drive? – ok, …

from here: PPG Is Back With An Awesome iPad App – Pro Tools Tips, Tricks & More… (no further info there except the image, just that they are amazed) ;) 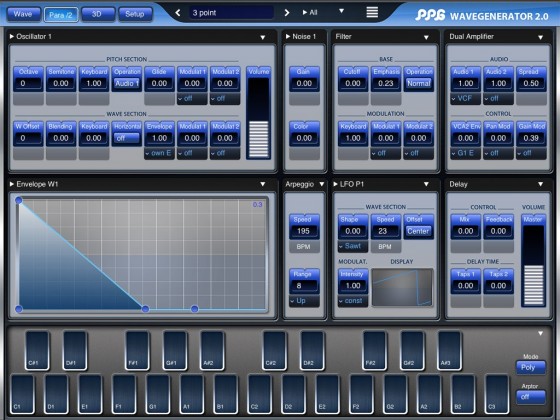 here’s a little teaser, see the wave edit and that 2D line?

update: THE MOST IMPORTANT ONE – how to really work with it and make Waves and Tables (Paths)